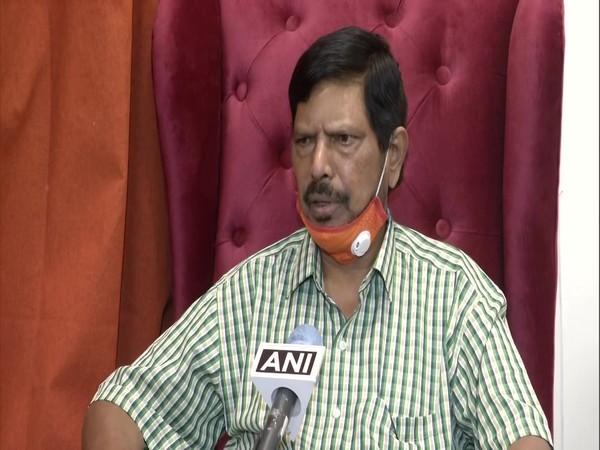 New Delhi [India], September 23 (ANI): Republican Party of India (RPI) leader and Union Minister Ramdas Athawale on Tuesday said that a law should be formed so that MPs should be suspended for a year and not just for a session for their unlawful behaviour.
Recently, Athawale wrote a letter to Prime Minister Narendra Modi and other leaders to make a law for suspension of MPs who creates ruckus in the house.
Speaking to ANI on the same, he said: “MPs should be suspended for a year not just for a session for their unlawful behaviour. Moreover, if they still behave like this then they should be suspended for the rest of their term. Such a law should be formed in the house.”
The Rajya Sabha had witnessed unruly scenes on Sunday as Opposition members stormed the well of the House and came near the podium, where Deputy Chairman Harivansh was seated, to protest against the Farmer’s Produce Trade and Commerce (Promotion and Facilitation) Bill, 2020 and the Farmers (Empowerment and Protection) Agreement of Price Assurance and Farm Services Bill, 2020.
Eight opposition MPs were suspended by the Rajya Sabha Chairman on Monday over the ruckus and the unruly scenes in the Upper House on Sunday. While the opposition members have expressed reservations over the manner in which the agriculture bills were passed, the government and BJP leaders have accused them of not following the directions of the chair. (ANI)