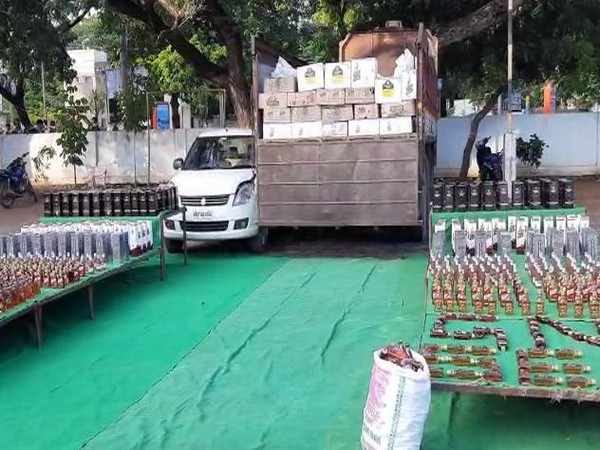 Guntur (Andhra Pradesh) [India], September 23 (ANI): Andhra Police has seized illegal liquor worth over Rs 13 lakhs and detained four persons in connection with the case in Palakaluru and Karumanchi villages in Guntur district.
“A total of 4,764 liquor bottles from Telangana and Goa states have been confiscated. Its total worth is Rs 13.58 lakhs,” Guntur Urban Superintendent of Police Ammi Reddy said.
Reddy and Special Enforcement Bureau ASP Arif Hafeez explained the details of the case.
Reddy said, “1308 liquor bottles from Goa and 3,456 liquor bottles from Telangana were caught. The total stock value of the liquor is over Rs 13 lakhs. This is a mere invoice value. They planned to sell it at higher prices.”
“Our team was checking vehicles based on credible information. They found a car in a suspicious condition. When checked, cartons were found in the boot space of the car. The main accused was found in the car. We came to know further leads while examining him. Then we seized the total stock,” he added.
The police seized a car and a 12-tyre lorry. Four accused have been detained and prime accused Ramakoteswara Rao was identified as the repeated offender. The Police will impose the Preventive Detention (PD) Act on him. (ANI)

Windies on board for T20 as Olympic sport but warn of…