Sushil Modi attacks Cong, RJD over RS ruckus, terms treatment meted out to Deputy Chairman as ‘insult of every Bihari’ 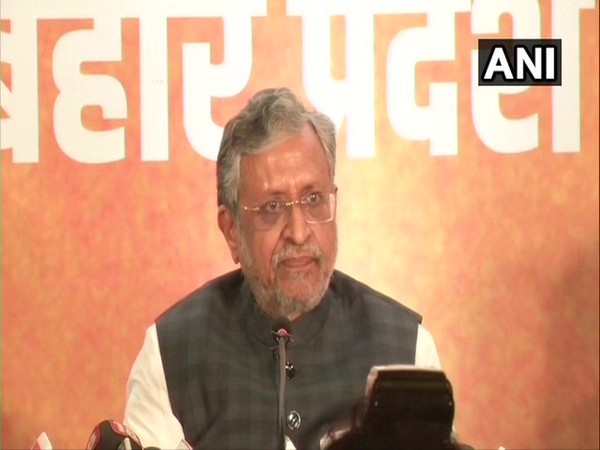 Patna (Bihar) [India], September 22 (ANI): Bihar Deputy Chief Minister Sushil Kumar Modi launched a fresh attack on the Rashtriya Janata Dal (RJD) and Congress over the ruckus created in Rajya Sabha on Sunday over the agriculture reform Bills.
Ahead of the upcoming Assembly elections in Bihar, the Bihar Deputy CM termed the treatment meted out to Deputy Chairman Harivansh by the Opposition members, “an insult of every Bihari”.
“What happened in the Rajya Sabha made headlines, the Opposition leaders flouted all COVID-19 related protocols. It was the first time in the Upper House’s history that the Opposition members from Congress and RJD reached the Deputy Chairman’s chair, they were throwing papers. The Deputy Chairman was abused, they tried to break his mike, they tore the Bill’s copies. The situation was so bad the marshals had to act as a wall between the Deputy Chairman and the Opposition leaders,” he said at a press conference here.
Further targeting the RJD he added, “When the then NDA government headed by Chief Minister Nitish Kumar in 2006 repealed the Agricultural Produce Market Committee Act as it was exploiting farmers and had become centre of corruption, RJD tried to create the same ruckus as they did in Rajya Sabha yesterday.”
The BJP leader also asked RJD whether it wanted to bring back the APMC Act into force in the State. The senior leader hailed the Bills brought by the Centre and said that it will now enable farmers the freedom to sell their produce to any seller around the country who can deliver the best price through the new bill.
“I want the RJD leaders to clarify that since they are opposing the bill, do they want to bring back the APMC in Bihar,” he said.
The Deputy CM also reiterated that the practice of purchase of produce by the government at the minimum support price (MSP) will not come to an end at any end across the country.
“In Punjab and Haryana, farmers are being stirred up that the MSP practice will be stopped. The Prime Minister has clarified it time and again that MSP will not be ended but unnecessarily a confusion is being created in the country. This bill gives farmers the choice,” he said.
The Rajya Sabha witnessed unruly scenes on Sunday as Opposition members stormed the well of the House and reached the Deputy Chairman’s seat to protest against the Farmer’s Produce Trade and Commerce (Promotion and Facilitation) Bill, 2020 and the Farmers (Empowerment and Protection) Agreement of Price Assurance and Farm Services Bill, 2020.
They were passed by the Upper House through voice vote. Both the Bills were earlier passed by Lok Sabha through voice vote. (ANI)