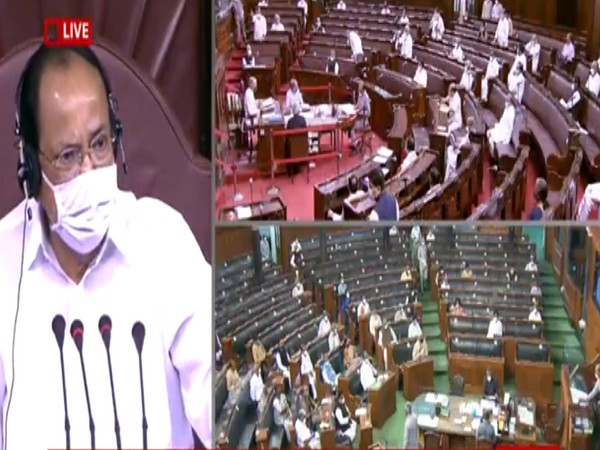 New Delhi [India], September 21 (ANI): Rajya Sabha Chairman M Venkaiah Naidu on Monday rejected the no-confidence motion moved by the Opposition against the Deputy Chairman Harivansh saying that it is “not admissible under the rules”.
Naidu said that he has received a letter from 46 Opposition MPs against the Deputy Chairman alleging violation of “norms of parliament procedures”.
“It was a bad day for Rajya Sabha yesterday when some members came to the well of the House. Deputy Chairman was physically threatened. He was obstructed from doing his duty. This is unfortunate and condemnable. I suggest to MPs, please do some introspection,” he said.
“The incidents are on record. Some members abused the chairman and the rulebook was thrown upon him. The Deputy Chairman would have been harmed too. This is condemnable, it tarnished the image of Parliament. I have received a letter from Opposition leaders, 46 members, to move a no-confidence motion against,” he added.
Naidu further said that the “motion is not in a proper format”.
“The no-confidence motion against the Deputy Chairman is not admissible under the rules,” he added.
The Opposition parties had submitted a no-confidence motion against Rajya Sabha deputy chairman Harivansh after he overruled opposition pleas for postponing Agriculture Minister Narendra Singh Tomar’s reply to the debate on the two farm Bills till Monday since the sitting time scheduled of the House was over.
Meanwhile, eight Opposition members have been suspended from the Rajya Sabha for one week for creating a ruckus on Sunday during the discussion over agriculture reform Bills.
“Derek O Brien, Sanjay Singh, Raju Satav, KK Ragesh, Ripun Bora, Dola Sen, Syed Nazir Hussain and Elamaran Karim suspended for one week for unruly behaviour with the Chair,” Rajya Sabha Chairman M Venkaiah Naidu said on Monday.
Rajya Sabha witnessed unruly scenes on Sunday as Opposition members stormed the well and reached the deputy chairman’s seat to protest against the farm Bills debated and passed by the Upper House through voice vote. (ANI)

Vergara’s wedding will be ‘tasteful’, says…

Bumrah seen in full tilt at nets ahead of SL T20I