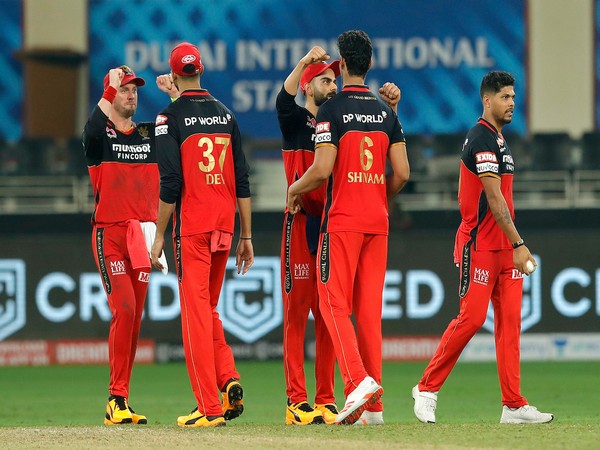 Dubai [UAE], September 21 (ANI): A spirited team performance by Royal Challengers Bangalore (RCB) guided them to a 10-run win over SunRisers Hyderabad (SRH) in the Indian Premier League (IPL) here at the Dubai International Stadium on Monday.
This is the first time since the last three seasons that RCB is starting their IPL campaign with a win.
Chasing a moderate total of 164 runs, SRH had an 18-run brief partnership for the opening wicket between skipper David Warner and Jonny Bairstow. In the second over, Warner returned to the pavilion after getting run-out on six runs.
Manish Pandey joined Bairstow in the middle and stitched a 71-run strong partnership for the second wicket.
In the 11th over, Bairstow was dropped at extra cover by Finch off Navdeep Saini.
Yuzvendra Chahal in the 12th over provided the much-needed breakthrough as he dismissed Pandey. He played a knock of 34 runs off 33 balls with one six and three fours.
Priyam Garg came in to bat at number four. He along with Bairstow added 32-run for the third wicket. Bairstow, after being offered three chances, was finally bowled by Chahal in the 16th over.
He played a knock of 61 runs off 43 balls studded with two sixes and six fours.
On the first ball of the 13th over, Dale Steyn dropped the opening batsman. It was surely Bairstow’s day as he was once again, for the third time, dropped at deep midwicket by Devdutt Padikkal in the 15th over.
In the same over, Chahal departed Vijay Shankar on a duck. Abishek Sharma and Garg then failed to stitch big partnership and the latter was departed in the 17th over by Shivam Dube.
Garg scored 12 runs. In the same over, Rashid Khan and Abishek (7) had a collision which resulted in latter’s run-out.
In the next over, Navdeep Saini bagged two wickets — Bhuvneshwar Kumar (0) and Rashid Khan (6). Dube, in the penultimate over of the innings, scalped Mitchell Marsh on a duck. The final nail in the coffin was hammered by Dale Steyn as he took Sandeep Sharma (9).
RCB bundled SRH at 153 runs as Chahal claimed three wickets while Dube and Saine bagged two scalps each.
Earlier, Devdutt Padikkal and AB de Villiers played knocks of 56 and 51 respectively as RCB posted 163/5 in the allotted twenty overs.
Along the course of this innings, de Villiers also registered his 200th six for RCB in the IPL. This was de Villiers’ 34th half-century in the Indian T20 tournament.
After being sent into bat, RCB got off to a good start as openers Padilkkal and Aaron Finch put on 90 runs for the first wicket.
The partnership between these two batsmen saw Padikkal registering a half-century in his first match in the IPL. Padikkal now has registered fifty-plus scores in all his major debut matches (first-class, List-A, T20, and IPL).
However, SunRisers Hyderabad made a strong comeback as the side got back-to-back wickets of Padikkal (56) and Finch (29) to reduce RCB to 90/2.
Padikkal was dismissed by Vijay Shankar while Finch was sent back to the pavilion by Abhishek Sharma.
Virat Kohli and AB de Villiers put on a brief-stand of 33 runs but their partnership was not able to go on for long as Kohli (14) was sent back to the pavilion by T Natarajan in the 16th over.
In the final overs, de Villiers was seen in sublime touch as he dispatched the Hyderbad bowlers for regular boundaries. However he did not get the desired support at the other end, and as a result, RCB was restricted to under the 170-run mark.
RCB will next take on Kings XI Punjab on September 24 while SRH will play against Kolkata Knight Riders on September 26. (ANI)

Back in the air: Domestic flights in Nepal resume after 7 month halt

Tarun Gogoi was admired and respected for his extraordinary wisdom, vision, ability:…

BJP will form govt in Maharashtra in next 3 months: Union minister