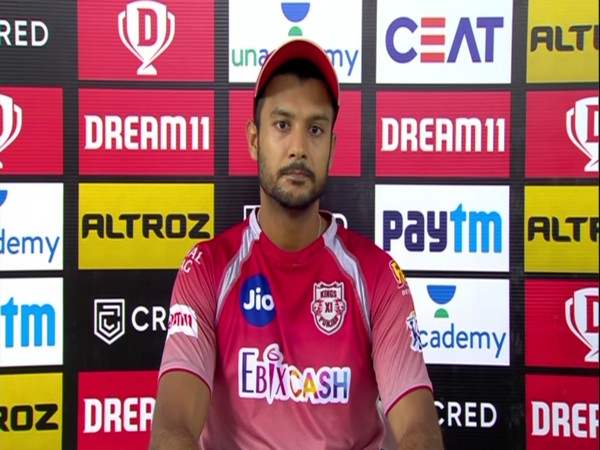 Dubai [UAE], September 21 (ANI): Kings XI Punjab batsman Mayank Agarwal said that Delhi Capitals’ all-rounder Marcus Stoinis “batted extremely well” as he played a knock of 53 runs off 21 balls and guided the side to a respectable total after losing a couple of quick wickets.
Both teams scored 157 runs which dragged the match into the Super Over. Punjab managed to score just two runs as Kagiso Rabada dismissed KL Rahul and Nicholas Pooran in the second and third deliveries respectively. Delhi Capitals then chased the target of three runs easily.
Agarwal’s knock of 89 runs off 60 balls studded with four sixes and seven fours went in vain.
Replying to a question by ANI in a virtual post-match conference, Agarwal said, “I thought Stoinis batted extremely well. Even if you made a little mistake, he took us apart. He had a great game. He really did well for them at the death. With us at death, we batted extremely well to reach there.”
Marcus Stoinis of Delhi Capitals was awarded Player of the Match for his all-round performance in the game. He bowled three overs and took two wickets. He finished with figures of 2-29 including the last over in which he defended 12 runs.
On the other hand, Agarwal said it is too early to comment on their death bowling as the team conceded too many runs in the last fours overs, including 30 runs alone in the 20th over.
“It is just the first game, kudos to him (Stoinis). He executed his plans well and got them a lot of runs in the death overs. If you had just one bad game, it does not mean anything. We are going to back our bowlers and look forward to the next game,” he said.
“I thought it was a decent score and we knew that we can stitch up partnership upfront and not give them wickets in the new ball, and then we would win the game,” he added.
The opening batsman said it was not the easiest wicket to bat on as the bowlers were getting help with the wicket.

“It is not a wicket where you can just go and start playing your shots. You got to give yourself some time and get set and then look to take on. It is not the easiest wicket to bat on,” Agarwal remarked.
Earlier, chasing a target of 158 runs, openers Agarwal and KL Rahul provided Kings XI Punjab with a decent start. The duo formed a partnership of 30 runs before Mohit Sharma bowled Rahul (21) in the fifth over.
Ravichandran Ashwin rolled his arms in the sixth over and took two wickets. He scalped the wicket of Karun Nair before dismissing Nicholas Pooran.
However, in a major blow to the Delhi team, Ashwin got injured and left the field.
Krishnappa Gowtham along with Agarwal kept Kings XI Punjab hopes alive. Agarwal smashed two boundaries off Anrich Nortje in the 13th over. Gowtham also started playing aggressively and both took the team to the 100-run mark in the 16th over.
However, in the same over, Rabada got rid of Gowtham, who scored 20 runs from 14 balls. Chris Jordan then joined Agarwal and the duo struck regular boundaries. In the 18th over, Agarwal smashed two sixes off Mohit Sharma’s over and also completed his half-century in the process.
In the final over, Kings XI Punjab needed 13 runs to win. Agarwal scored 12 runs off the first three balls but Stoinis made a stunning comeback. Stoinis bowled a dot ball before taking two wickets off the last two deliveries, taking the match into the Super Over. Agarwal was dismissed after scoring 89 runs.
Punjab will next take on Royal Challengers Bangalore in their next match at Dubai International Stadium on September 24. (ANI)