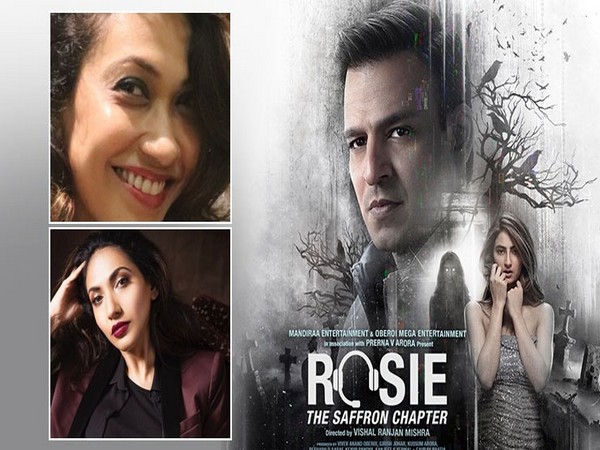 New Delhi [India], September 20 (ANI): Mandiraa Entertainment, headed by Prerna V Arora and Kussum Arora, has been going places. The two sisters have come up with some of the most exciting content of this year.
They have announced tie-ups with Vivek Oberoi’s production house and then with Aftab Shivdasani’s production house, and have come up with mega movies like ‘Iti’, ‘Rosie’ and ‘Dhundh’. Catering to the humongous buzz created by fans about the movies on social media, the makers decided to launch the first look of the lead cast of the horror-thriller ‘Rosie’. It’s something that, as an audience, no one had seen before and that only added to the excitement.
Talking of ‘Rosie’, it is a genre-defining film with a novel experience and it is India’s first horror-thriller film franchise. It’s based on true events. The franchise’s first part known as, ‘Rosie: The Saffron Chapter’ is set against the backdrop of one of the most haunted places of Gurugram – the Saffron BPO. The film, inspired by true events, tells the story of a young girl named Rosie, who used to be an employee in this BPO.
“With Rosie, our aim is to push the envelope in Bollywood by bringing in a new kind of storytelling in the horror-thriller genre. The first look is just the tip of the iceberg to give a sense of what’s coming to the audience. We are ready to go into production by the end of November 2020. We are closely monitoring the pre-production and will be following the safety guidelines to the highest possible degree, during the shoot,” said Mandiraa Entertainment’s Prerna V Arora.
“Rosie is the doorway to a new world of franchise horror-thrillers in India. The film will lay the foundation for advanced storytelling in this genre. We are proud to present this film and bring in new flavours for the masses,” said Producer Kussum Arora.
‘Rosie: The Saffron Chapter’ stars Palak Tiwari in her debut role. The film is presented by Mandiraa Entertainment and Oberoi Mega Entertainment in association with Prerna V Arora, and produced by Vivek Anand Oberoi, Girish Johar, Kussum Arora, Reshabh D Saraf, Keyur Pandya and Sanjeet S. Yermal. The film is all set to go on floors by November. It shall hit theatres mid-2021.
This story is provided by Mandiraa Entertainment. ANI will not be responsible in any way for the content of this article. (ANI)

IPL 13: ‘Buttler wasn’t part of bubble as he travelled from UK in different plane with family’

US toughens asylum rules for migrants