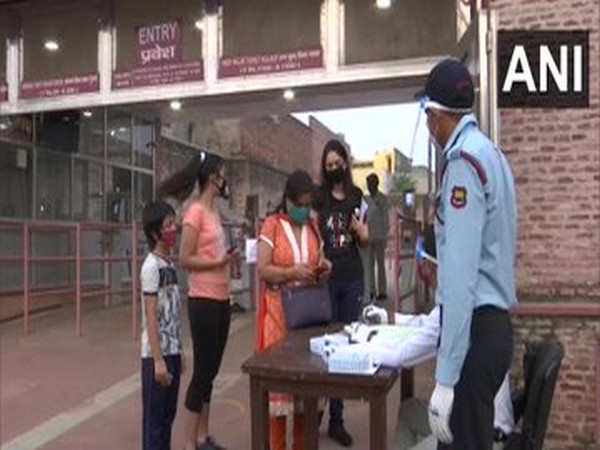 By Joymala Bagchi
Agra (Uttar Pradesh) [India], September 21 (ANI): After being shut for tourists for around six months, one of the seven wonders of the world, Taj Mahal reopened from Monday.
It was closed on March 17 after all heritage monuments protected under the Archeological Survey of India, after discussion with the union ministry of culture, were asked to close for the visitors following the rapid outbreak of SARS-CoV-2.
One of the first few visitors to step inside the Taj Mahal’s premises Debargha Sengupta, 25 arrived in Prayagraj on September 19 for SSB exam and later took a train to Agra to visit the monument for the first time ever.
“The government locker room was closed for which I had to keep my luggage in a private shop but as I took entry and saw Taj Mahal for the first time ever I remained speechless. It is mesmeric. Moreover, less crowd had added more essence of its majestic presence,” he said.
Another visitor Nishant Vasisht told ANI, “It’s incredible and historical at the same time. This is the first time ever that Taj was shut for six months. We are here to witness the change. The new normal has to be expected and adopted for our good. I have come with my family, stood in the queue, got digital tickets, and all set to see Taj.”
Shefali a guide by profession said, “We were allowed inside only after the guards checked our body temperature. Shoe sanitizers are there at the entry point. It feels great. There is not much crowd at this time (around 6:30 am) so the scene will be different.”
To keep up with the COVID guidelines, the site has imprinted norms saying not more than five thousand visitors are allowed in a day. Also, group photographs are not at all encouraged.
Guards are keeping strict vigil so that tourists do not touch the railing and walls of the monument and used tissue paper, mask, gloves shoe covers are dumped in the dustbin.
Although most of the historical sites under ASI were opened, Agra Fort and Taj Mahal remained closed as it fell under the containment zone.
Among 3691 monuments across India under the ASI, many were opened for the public since July 6. The Taj Mahal was built by Mughal emperor Shah Jahan in the 17th Century as a mausoleum for his wife Mumtaz Mahal. (ANI)