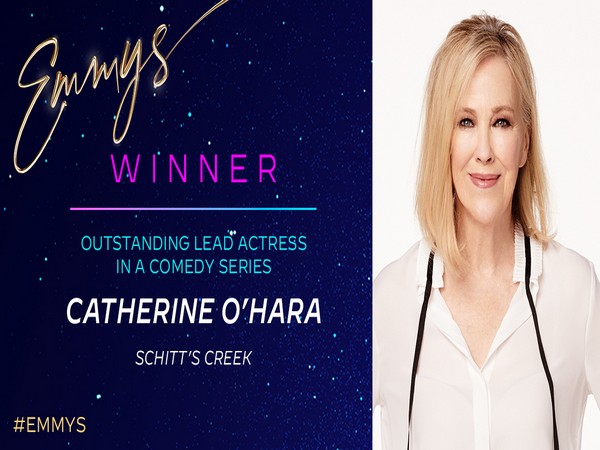 Los Angeles [US], September 21 (ANI): Canadian-American actor Catherine O’Hara won the Emmy Award for ‘Outstanding Actress in a Comedy Series’ for her portrayal of Moira Rose in Netflix’s ‘Schitt’s Creek’.
Schitt’s Creek is a Canadian television sitcom created by Dan and Eugene Levy. The series follows the trials and tribulations of the formerly wealthy Rose family when they are forced to relocate to Schitt’s Creek, a small town they once purchased as a joke.
Christina Applegate (Dead to Me), Rachel Brosnahan (The Marvelous Mrs. Maisel), Linda Cardellini (Dead to Me), Catherine O’Hara (Schitt’s Creek), Issa Rae (Insecure), and Tracee Ellis Ross (Blackish) were nominated this year for ‘Outstanding Lead Actress in a Comedy Series’.
The 72nd Primetime Emmy Awards were originally slated to be held at Microsoft Theater in Los Angeles. However, due to the COVID-19 pandemic, it was decided that the ceremony will be held virtually from the actors’ homes across the US.
American television host Jimmy Kimmel is hosting this year’s Emmys. The award show was preceded by the 72nd Primetime Creative Arts Emmy Awards and it was held from September 14-19.
The nominations for this year’s Emmys were announced on July 28 and it was led by HBO’s mini-series ‘Watchmen’ after having 26 nominations to its name.
HBO’s ‘Succession’ and Netflix’s ‘Ozark’ were nominated for 18 awards.
In terms of comedy series, Amazon Prime Video’s “The Marvelous Mrs. Maisel” led the nominations with 20. (ANI)

Eugene Levy wins Emmy for his portrayal in ‘Schitt’s Creek’

2 held for stealing Rs 12 lakhs from ATM in Indore

No home-grown talent: Is there an identity crisis at FC…