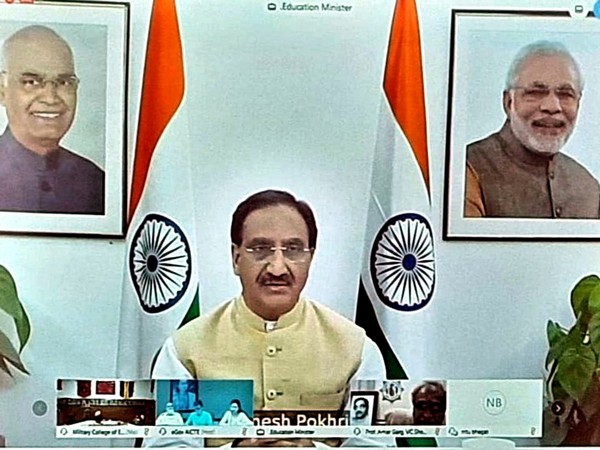 New Delhi [India], September 19 (ANI): The National Education Policy (NEP) 2020 is directed towards major reforms in school education and it envisions an India-centred education system that contributes directly to transforming the country, said Union Education Minister Ramesh Pokhriyal Nishank on Saturday.
“National Education Policy 2020 is directed towards major reforms in both school and higher education level. It envisions an India-centred education system that contributes directly to transforming India into a Global Superpower,” the Education Minister was quoted as saying in an official release.
Earlier today, President Ram Nath Kovind virtually inaugurated the Visitor’s conference of Vice-Chancellors of Central Universities, Directors of Institutions of National Importance of Ministry of Education and other Ministries.
Union Minister of Education, Ramesh Pokhriyal was also present on the occasion.
“The National Education Policy aims to reorient the education system towards meeting the needs of the 21st century by achieving the twin objectives of inclusion and excellence. It sets the vision of developing an equitable and vibrant knowledge society by providing quality education to all, said the President of India, Ram Nath Kovind in the inaugural address of Visitors’ Conference,” an official release stated.
President mentioned that the Policy has been prepared after extensive consultation with 2.5 lakh gram panchayats, more than 12,500 local bodies and about 675 districts generating more than two lakh suggestions thereby reflecting a ground-level understanding.
During the address, the President also highlighted that the target of the NEP 2020 is to increase the Gross Enrolment Ratio or GER in higher education to 50 percent by 2035. (ANI)

Study reveals COVID-19 patients who undergo surgery are at…