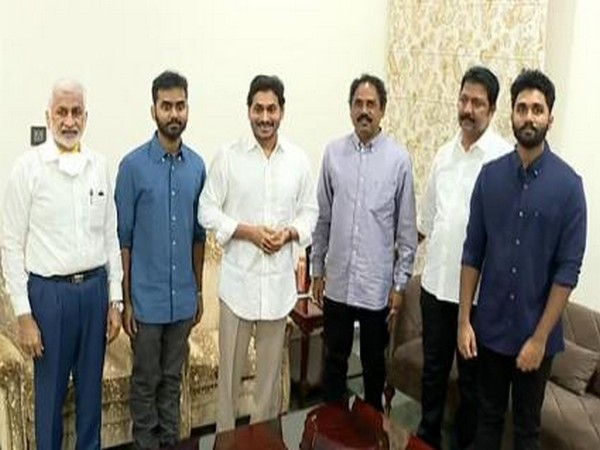 Amaravati (Andhra Pradesh) [India], September 19 (ANI): Telugu Desam Party (TDP) MLA Vasupalli Ganesh and his two sons Surya and Govind Saket joined Yuvajana Sramika Rythu Congress Party (YSRCP) in presence of Chief Minister YS Jaganmohan Reddy at his camp office in Amaravati on Saturday.
Speaking at the occasion, Ganesh said that after watching the welfare work done by Chief Minister Reddy during his tenure, he understood TDP could “never come to the level”.
“Whenever I saw Jagan either in the Assembly or outside, I felt he has guts, courage, love, and compassion. His work is taking the state ahead. One must have guts to give something to the poor. Jagan has introduced many welfare schemes that are reaching the needy at the bottom level. After seeing his works, I understood that TDP will never come to that level,” he said.
He also appreciated the Andhra government’s three capital plan and said that there are many welfare works that need to be undertaken in his constituency Visakhapatnam South, and Chief Minister Reddy can help him in that regard.
“Jagan has made history by announcing Visakhapatnam, my native place, as the new capital zone. It is a proud moment for us. Keeping all such factors in mind, today I have joined this party. The people of Visakhapatnam South constituency people have many expectations on me. There are several welfare works to be done in my constituency, and only Chief Minister can help me in this regard,” he said.
He added that will work hard for the forthcoming local body elections and promised to “gift mayor seat to Jaganmohan Reddy”.
Interestingly, Ganesh did not announce resignation to TDP before joining YSRCP today.
YSRCP general secretary Y Vijaysai Reddy and ex-TDP MLA Vamsi Vallabhaneni were also present during Ganesh’s induction ceremony in the Reddy-led party. (ANI)