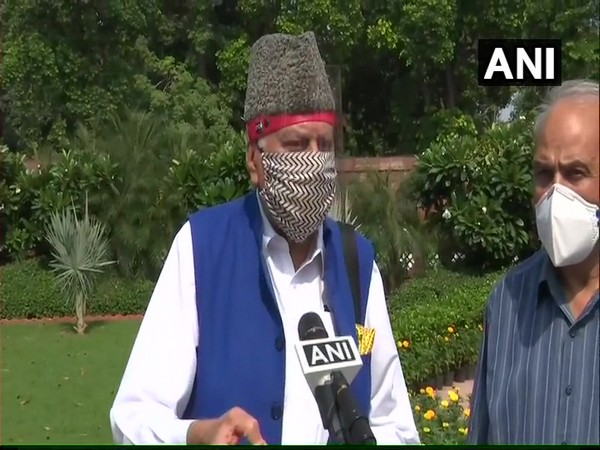 New Delhi [India], September 19 (ANI): Former Jammu and Kashmir Chief Minister Farooq Abdullah on Saturday said that he was not against the operations being carried out by security forces in the valley but against the loss of innocent lives during those operations.
While speaking to ANI about the Amshipora case, where three natives of Rajouri were killed in an encounter, Adbullah said, “We are not against any operation carried by security forces in Jammu and Kashmir but we are against the killing of innocent lives during the operations.”
While speaking in the Lok Sabha, the Lower House of the Parliament, earlier today, the National Conference MP also referred to reports that an inquiry by Army had found “prima face evidence” that the Armed Forces (Jammu and Kashmir) Special Powers Act was exceeded during an anti-terror operation in Shopian earlier this year.
“The Army has agreed that the three persons who were killed in Shopian were killed by mistake and the government should provide a huge compensation in this case,” Abdullah said.
Yesterday, Army chief General Manoj Mukund Naravane had said that the investigation into the Amshipora case will be conducted with utmost fairness and will be taken to their logical conclusion.
Meanwhile, the Army said that the inquiry ordered by the Army authorites into Operation Amshipora has concluded adding that during the operation, powers vested under the Armed Forces Special Powers Act (AFSPA) 1990 were exceeded.
According to an official release, the inquiry has brought out certain prima facie evidence indicating that during the operation, powers vested under the AFSPA 1990 were exceeded and the Do’s and Don’ts of Chief of Army Staff (COAS) as approved by the Supreme Court have been contravened.
Consequently, the competent disciplinary authority has directed to initiate disciplinary proceedings under the Army Act against those found prima-facie answerable. (ANI)

Germany gear up for Nations League match vs Netherlands