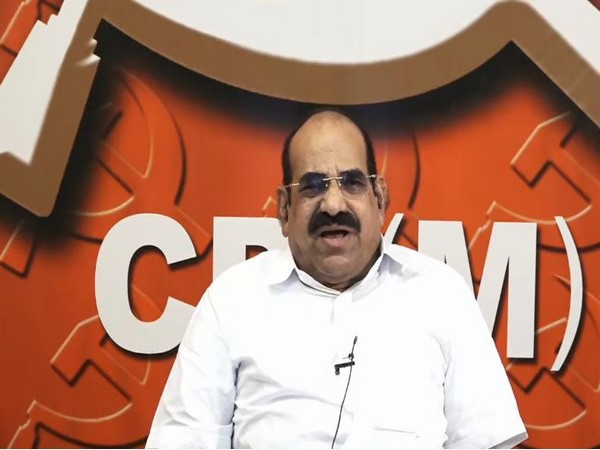 Thiruvananthapuram (Kerala) [India], September 18 (ANI): CPI(M) Kerala State Secretary Kodiyeri Balakrishnan on Friday said that Higher Education Minister KT Jaleel will not resign from his post as he was only questioned as a witness by National Investigation Agency (NIA) in the gold smuggling case.
Speaking at an online press conference, Balakrishnan said, “Demands of Jaleel’s resignation by Opposition parties will not be accepted by our party as KT Jaleel was only questioned as a witness in the gold smuggling case by NIA.”
“BJP and United Democratic Front (UDF) is trying to sabotage Left Democratic Front (LDF) government. Protesters are attacking ministers on road. Both BJP and Congress are fielding goons in protests,” he said.
Further commenting on the Indian Union Muslim League (IUML), a constituent partner of UDF, Balakrishnan said, “Muslim League leader PK Kunjalikutty should answer whether he agrees with BJP’s stand of not distributing Quran. Baghvatgeeta and Bible are distributed here. Then why anyone has an issue with the distribution of the Quran? Why doesn’t the central government examine whether gold was smuggled along with Quran and dates? If anyone has proof they should give it to the investigating agency rather than raising baseless allegations.”
He said his party will observe Martyr’s day on the occasion of CPI(M) leader Azhikodan’s death anniversary on September 23 and hold programs on the branch committee level to expose Opposition parties’ protests on the gold smuggling case.
Speaking on the Central government’s farmers’ bill, he said that CPI(M) will protest against the central government’s policies and farmers’ bill on September 22 at all district headquarters across the state.
“Farmers’ bill is against farmers’ interest and it will put the agriculture sector in the hands of corporate. The central government is not listening to CPI(M)’s demand to distribute Rs 7,500 to all the families that are not paying direct taxes across the country. During the protest the party will raise all these people’s issues,” he said. (ANI)

Father receiving treatment in Delhi, my Bihar visit will be…