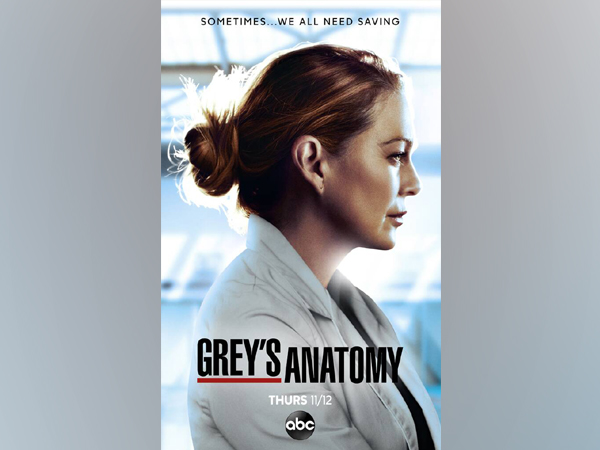 Washington [US], September 18 (ANI): Less than a month after American actor Ellen Pompeo put her scrubs back on to kick off production for season 17 of ‘Grey’s Anatomy’, ABC revealed the premiere date for the hospital drama.
According to E!News, the much-loved TV show will return for a two-hour premiere on November 12. The show will follow the season four return of ‘Station 19’ for a stay-glued-to-your-couch crossover premiere event. Other TV shows including ‘The Good Doctor’, ‘For Life’,’ A Million Little Things’, and newcomer ‘Big Sky’ are also all slated to premiere in November.
“Our fall series is now complete with a dynamic lineup of new and returning drama series,” said Karey Burke, president of ABC Entertainment, in a statement. “From fan-favourite shows like ‘Grey’s Anatomy’ and ‘The Good Doctor’ to David E. Kelley’s thrilling new drama ‘Big Sky’, our strength is in our storytelling, and we could not be more energized to bring these compelling series to our viewers.”
On September 8, Pompeo shared a preview of the new season and dedicated a photo of herself in scrubs to healthcare workers tackling the coronavirus. She wrote, “I dedicate my season 17 to all who have fallen and to every one of you who by the grace of God is still standing. This season is for you with humility and a bit of humour to get us through and endless amounts of gratitude. I hope we do you proud.”
As per E!News, ABC also released a season 17 poster with Meredith Grey front and centre.
The news of season 17’s return also comes with a brand-new, seconds-long teaser that amps up Teddy and Owen’s relationship status. ABC also dropped a teaser for ‘Station 19’.
Season 17 of ‘Grey’s Anatomy’ returns to ABC on Thursday, November 12 at 9 pm ET. (ANI)