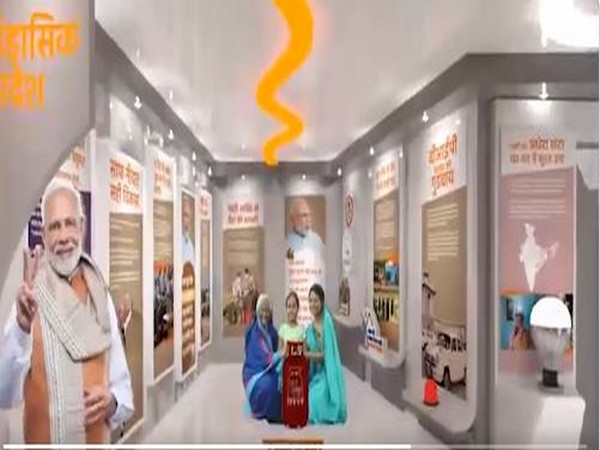 New Delhi [India], September 17 (ANI): On the occasion of Prime Minister Narendra Modi’s 70th birthday, Bharatiya Janata Party (BJP) has organised a virtual exhibition on the NaMo App about the PM’s inspiring journey of life and his achievements.
The news came to light after the political party posted a message on Twitter asking people to visit the virtual exhibition.
“Glimpses of NaMo’s inspiring life! A special virtual exhibit for a special day, greet your favourite leader on his 70th birthday from home! Witness PM Narendra Modi’s life-story, his journey, his achievements in never-before-seen format. Watch Virtual Exhibition on NaMo App,” the message from BJP on Twitter read.
In the virtual exhibition, the party has showcased the childhood struggle of PM Modi via a short video.
It also gave information on the Prime Minister’s self-exploration to the Himalayas with the title ‘YOUNG NAMO, Discovery of Self’ and also shared the photographs of him while meditating.
This virtual exhibition also showed that when he was the chief minister of Gujarat, how Prime Minister Narendra Modi personally requested the parents of the girl child to send them to school, resulting in dropout rate reduced from 20 per cent to 2 per cent.
It also talked about the Gujarat Model and stated that ” In 2001, following the devastating earthquake in Gujarat, the morale and spirits were low. The future looked uncertain, Narendra Modi gave Gujarat crucial leadership at such a time and overturned the situation completely entrepreneurship, industry and agriculture flourished due to good governance.”
Another slide showcased the work undertaken by the Prime Minister since 2014 such as introducing Ujjwala Yojana, Swachh Bharat, Beti Bachao, Beti Padhao etc.
It also mentioned the commencement of the construction of Ram Mandir claiming that it has fulfilled the ” civilizational dreams of Indians.”
The virtual exhibition also showcased the events in which the world leaders have honoured the Prime Minister and how Indians worldwide feel a sense of pride.
To mark the occasion, the Bharatiya Janata Party (BJP) has also organised a week-long ‘Seva Saptah’ in which programmes pertaining to cleanliness, distribution of sanitation pads, wheelchairs and social service are being organised from September 14 to 20 across the country. (ANI)