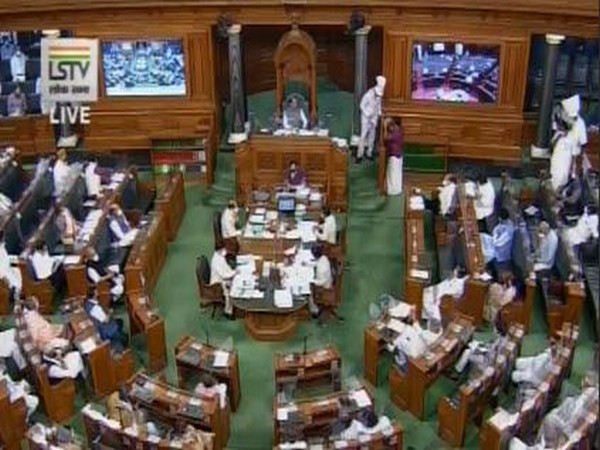 New Delhi [India], September 16 (ANI): Lok Sabha on Wednesday passed a bill that seeks to address the potential disruptions in the financial system by providing for the Reserve Bank of India to prepare a scheme for reconstruction or amalgamation of the banking company without the necessity of first making an order of moratorium.
The Banking Regulation (Amendment) Bill, 2020 was passed after a reply by Finance Minister Nirmala Sitharaman. It will replace an ordinance brought by the government in June this year.
Sitharaman said amendment bill was brought to protect the interest of depositors of cooperative banks.
“This amendment is not for central government to take over cooperative banks or to control cooperative banks. And it is not the first time that regulation for extending some powers to RBI is happening. Since 1965, cooperative banks are already being regulated by RBI,” she said.
Sitharaman said that there was a need for an ordinance as there was uncertainty over the next session of parliament due to COVID-19 and the protection of depositors was of critical importance.
“We certainly want to support the cooperative movement…Several eminent committees have said there is a need to regulate them. In last two decades, 430 cooperatives banks have been delicensed and they have gone into liquidation. But not a single commercial bank whose depositors are protected by banking laws to the full extent of Banking Regulation Act has gone into liquidation,” she said.
“I acknowledge the important contribution of cooperative banks. It is necessary in the interest of depositors and also the banks themselves that we need some banking laws also for cooperative banking activity. We are doing nothing in other works of cooperative societies,” she added.
The minister said that the financial data shows that there is an increase in the gross NPA ratio of the urban cooperative banks from seven per cent in 2018-19 to 10 per cent. (ANI)

Chargesheet in Delhi violence case is a cheatsheet: Brinda Karat

International Film Festival of India postponed to 2021 amid pandemic

IPL 13: We are pretty positive after match against Delhi, says Kumble

Bombay HC to hear suspended pleas on September 25 and 26

Experts believe second wave of COVID-19 at peak, its intensity will reduce in coming days: Kejriwal

IPL 13: We are pretty positive after match against Delhi, says Kumble

FinMin in consultation with states on Auto GST: Gadkari