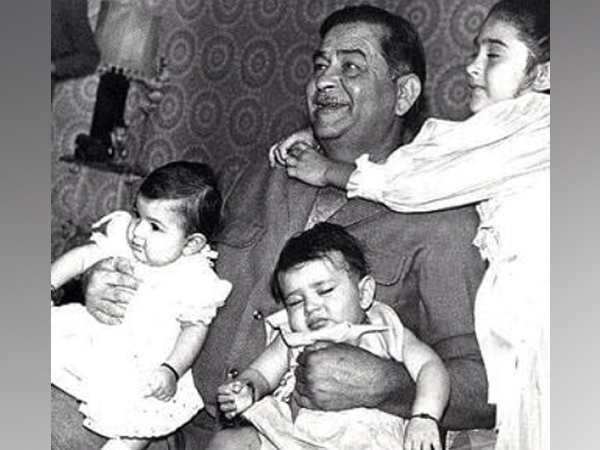 New Delhi [India], September 15 (ANI): Actor Kareena Kapoor Khan extended birthday greetings to her cousin sister and late legendary actor Rishi Kapoor’s daughter Riddhima Kapoor Sahni with a priceless throwback picture.
The ‘Jab We Met’ actor took to Instagram to share the throwback picture from her childhood.
The monochrome picture that features the Kapoor sisters — Karisma Kapoor, Kareena Kapoor and Riddhima Kapoor — along with their grandfather and iconic superstar Raj Kapoor.
While the toddlers Kareena and Riddhima are seen seated on the lap of their grandfather in the picture, Karisma Kapoor is seen standing next to Raj Kapoor with her hands wrapped around his neck.
“Sister sledge, Happy birthday beautiful Ridz @riddhimakapoorsahniofficial,” she wrote in the caption.
Daughter of superstars Rishi Kapoor and Neetu Kapoor — Riddhima Kapoor Sahni — celebrated her birthday in Mumbai with her family last night, which was also joined by the family’s close friend and actors Soni Razdan and Alia Bhatt. (ANI)

Amid rise in prices, fewer customers at Delhi’s Gazipur market

11 give slip to JFK security officials

‘Happy New Year’ will be a blockbuster: Boman…