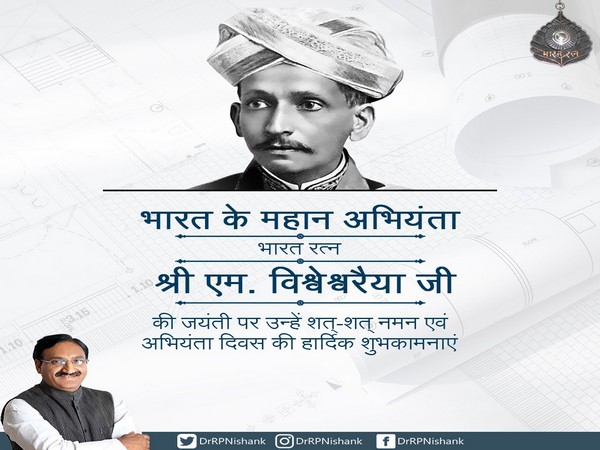 New Delhi [India], September 15 (ANI): Union Education Minister Dr Ramesh Pokhriyal Nishank on Tuesday paid tribute to the father of Indian engineering Bharat Ratna M Visvesvaraya on his 159th birth anniversary.
To honour him, India celebrates Engineers’ Day on September 15 each year.
“Salute to him on the Engineer Day, the birth anniversary of the great engineer and diplomat ‘Bharat Ratna’ of modern India, Shri M Visvesvaraya. Heartfelt congratulations and best wishes to all engineers who have made invaluable contributions in the progress of the country,” he tweeted (roughly translated from Hindi).
Nishank also urged people to remember the innovations done by the Indian engineers on this day.
“Mokshagundam Visvesvaray was a prolific engineer, educationist and statesman of the 20th century. His birth anniversary, Sep 15, is celebrated as Engineer’s Day. Let’s commemorate the innovations and great work of our engineers on this Engineer’s Day,” he tweeted.
The Union Minister also shared lines of Prime Minister Narendra Modi for Indian engineers and tweeted, “From Make in India to Digital India, India’s engineers have a pivotal role in realizing the aspirations of India– Honourable PM Shri Narendra Modi.”
Born on September 15, 1861, in Muddenahalli near Chikkaballapur, M Visvesvaraya was a world-renowned civil engineer and is considered of the foremost nation-builders, creating marvels upon which modern India was built. (ANI)

Assailant asks for the time, stabs stranger with a box cutter and steals wallet on CTA Red Line train in Uptown