Our bowling plan was just to attack, says Chris Woakes 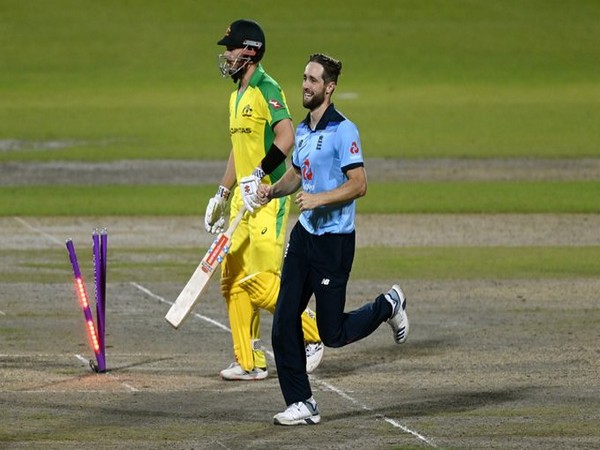 Manchester [UK], September 14 (ANI): After registering a thrilling 24-run victory over Australia in the second ODI of the three-match series, England pacer Chris Woakes revealed that their bowling plan was just to attack the visitors and not give them an inch.
England defended a score of 231 in the second ODI and the hosts managed to bundle out Australia for 207 as Chris Woakes, Jofra Archer, and Sam Curran scalped three wickets each.
“If you held your length well, it was always going to be difficult for the batsman to score freely. We certainly found that with the bat, and then pressure builds and that’s when you pick up wickets,” Woakes told Sky Sports, ESPNCricinfo reported.
“The chances come when you’re building dots regularly, so you’re constantly trying to bash a good length and make sure the batsman is going to play your best ball as many times as possible,” he added.
Marnus Labuschagne and Aaron Finch had managed to retrieve the innings for Australia. The duo put on 107 runs for the third wicket, but England staged a remarkable comeback as the side dismissed Labuschagne (48), Mitchell Marsh (1), Aaron Finch (73), and Glenn Maxwell (1) in quick succession, reducing Australia to 147/6.
Woakes got the crucial breakthroughs of Finch, Maxwell, and Labuschagne while Archer dismissed Mitchell Marsh. Archer had also managed to get the wickets of David Warner and Marcus Stoinis up at the top.
Talking about Australia’s collapse from 144/2 to 147/6, Woakes said: “At that point, we were just thinking attack, attack, attack. Try and get as many wickets as possible. We used cross-seam quite a bit to get that ball to go reverse and thankfully we got a bit of that.”
“It was moving off the straight, and we always felt that if we could pick up a cluster of wickets in the middle, it was going to be difficult for the new guys coming in. Eoin bowled me and Jof out, and we sensed that was the moment we had to make the most of the ball going sideways,” he added.
With this win, England levelled the three-match series at 1-1. Both sides will now lock horns in the third and final ODI of the series on Wednesday, September 16. (ANI)

Chandigarh Ramleela likely to be webcast amid COVID-19 scare

‘You have to learn how to lose’: Gonzalez on Neymar

Coronavirus spread by people with no symptoms ‘appears…