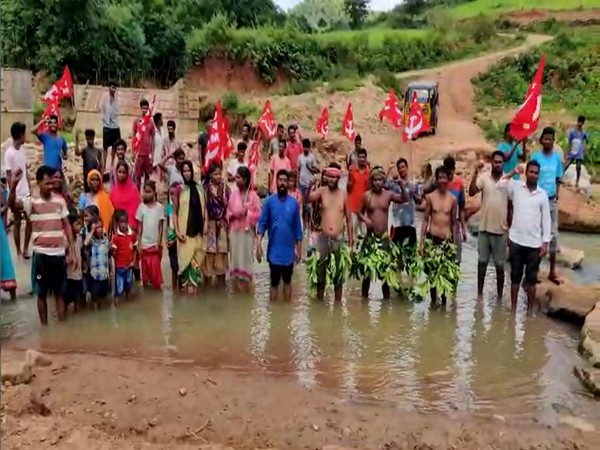 Visakhapatnam (Andhra Pradesh) [India], September 10 (ANI): Communist Party of India (Marxist) (CPM) workers and locals from the Bondam village in Visakhapatnam here on Thursday held a protest demanding the completion of the Kaliaguda Kothavalasa bridge’s construction and the road connecting Jayanti Valasa to the Konapuram junction.
The protest was held at a stream near the area under construction in the Araku Valley Mandal.
According to the protesters, despite the allocation of Rs 1.73 lakhs by the central government, the construction of the bridge was not yet completed.
“In 2018-19, Rs 1.73 lakhs was provided by the central government as special central assistance. Even the state-tribal welfare granted financial aid. Construction work started in November last year but it is still not complete. The delay in construction has caused a lot of problems for people in nearby tribal villages like Bodam, Koliaguda, Kothavalasa, and Konapuram, among many others,” a CPM protester told ANI.
He further added, “The roads are also terribly damaged, even an ambulance cannot go to the villages. We demand the completion of the bridge and the road. The government must also see to it that the quality of both is maintained properly.” (ANI)

Italy or Ronaldo, which will it be?

‘There is a campaign to show Kerala failed in Covid…