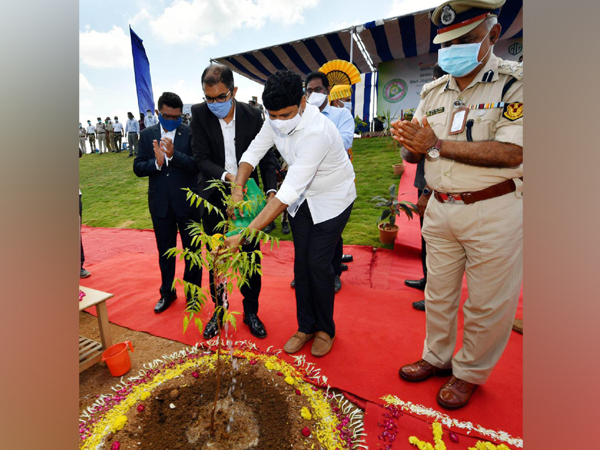 Hyderabad (Telangana) [India], September 8 (ANI): GMR Hyderabad International Airport in collaboration with the Airport Security Group of Central Industrial Security Force (CISF) organised “Telanganaku Haritha Haaram”, #GreenIndiaChallenge function at Hyderabad Airport City near GMR Arena on Tuesday, according to an official release.
Rajya Sabha MP Joginapally Santosh Kumar, who was the Chief Guest of the event planted a sapling of neem on the occasion.
“Approximately 600 saplings were planted by the airport CISF personnel during the event. These saplings which were planted were of native species and well-developed hardy plants, easy for them to sustain and grow,” read the release.
Some of the key saplings planted included – Neem/Azadirachta indica, Pongamia/ Pongamia glabra, Bauhinia/ Bauhinia accuminata, Acacia/ Acacia auriculiformis, Pink Tabebuea/ Tabebuia rosea, Gulmohar/ Dalonix regia, Jacaranda/ Jacaranda mimosifolia among others.
These plants will be maintained by the airport under its green initiative, the release said.
Pradeep Panicker, CEO, GHIAL, MK Singh, DIG/Chief Airport Security Officer, CISF, Bharat Kamdar, Head – Security, GHIAL were also present in the event.
The airport has a ‘green’ passenger terminal building, which has won the ‘Silver’ rating in ‘Leadership in Energy and Environmental Design’ (LEED) certification in the year 2008 by the US Green Building Council, read the release.
The airport also has a 10 MW capacity captive solar power plant, for its energy needs. (ANI)

Messi returns to training in a bid to appear in clash…

India reports one of the lowest COVID-19 cases per lakh…

NTR target can be raised moderately on spectrum auction