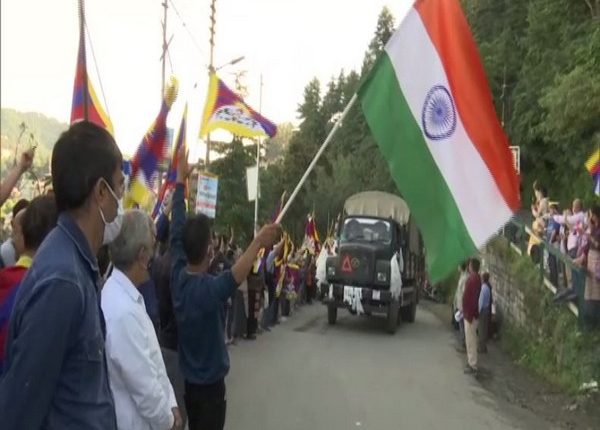 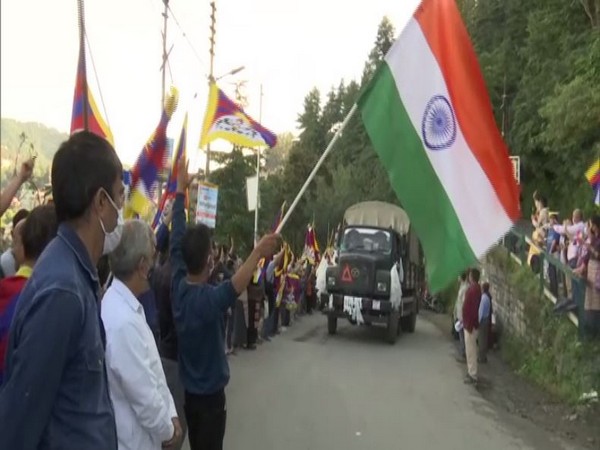 Shimla (Himachal Pradesh) [India], September 4 (ANI): Members of the Tibetan community in Shimla gathered to boost the morale of the Special Frontier Force (SFF) as they left for the Line of Actual Control (LAC) along the India-China border in Himachal Pradesh and Ladakh.
Locals gathered at Panthaghati on National Highway-5 near Shimla to boost the morale of the Indian army before heading towards the conflict zone between India and China border region.
The Indian Army personnel were given warm respect and welcome in a traditional Tibetan Buddhist way.
Palden Dhondup, a Tibetan youth in exile told ANI, “This Special Frontier Force was established in 1960 and the Tibetans living in exile feel proud to welcome and support their fellow Tibetans. They have been serving in the Indian Army as frontline warriors over 50 decades now.”
Extending his wishes to the force, Yarphel, a Tibetan Buddhist monk said that we have offer KHATA (Buddhist prayer scarf) to the troops here to wish them good luck before they head towards China Border.”
One of the retired Tibetan from Special Tibetan Frontier Force, Pema Dorjee said that this force plays an important role during the stand off on the borders. Dorjee said, “It becomes the duty of the Tibetan community-in-exile to support and boost the morale of the force.”
Rakesh Sharma, former Deputy Mayor of Shimla Municipal Corporation said the Indian community with Tibetans joins hands to inspire the soldiers.
Sharma said, “It is a privilege and proud moment to support these soldiers.” (ANI)

IPL 13: Harbhajan says he will not play, wishes CSK luck

Mild, asymptomatic COVID-19 patients may not be infectious…