Congress hits out at Centre, says India being pushed towards ‘financial emergency’ 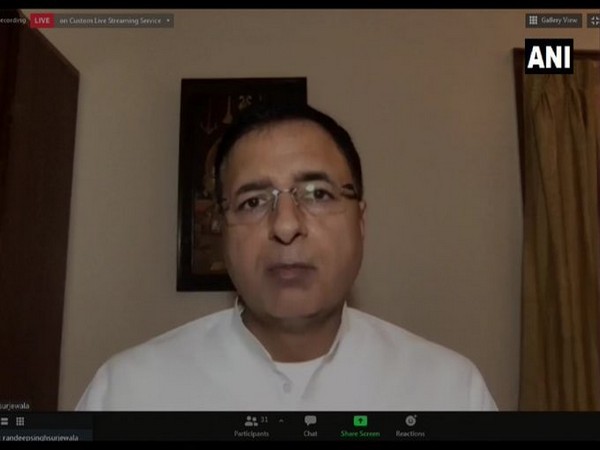 New Delhi [India], September 3 (ANI): The Congress on Thursday targeted the Centre over the economic situation in the country and said that India is being pushed towards a “financial emergency”.
“There are dark clouds of economic decay all around us. Lives, livelihoods and jobs have been ravaged. Businesses and small and medium industries lie dilapidated. The Economy stands destroyed as GDP has been razed and mowed down. India is being pushed towards a ‘financial emergency’,” Congress spokesperson Randeep Singh Surjewala said in a press conference.
“Modi Government has plundered the economy in the last 6 years by its ‘Acts of frauds’. The Government now describes its criminal ineptitude and culpable incompetence as an ‘Act of God’. Sadly, this is the only Government in the past 73 years which blames ‘God’ for its own frauds and bluster,” he said.
Surjewala also said that by abolishing question hour in the monsoon session of Parliament beginning from September 14, the government is running scared of answering relevant questions.
“By abolishing question hour in Parliament, govt is running scared of answering relevant questions. Modi govt doesn’t want to answer on brazen transgression by China onto Indian Territory, blunder of Indian economy, falling GDP and over 12 crore job losses,” he said.
The Congress leader said that the Government of India is a “declared defaulter” for the first time in the last 73 years.
“In the meeting of ‘Parliamentary Standing Committee on Finance’ dated August 11, 2020 the Finance Secretary clearly said that Government of India is not in a position to give GST compensation to States. The latest SBI report of September 1, 2020, predicts a shortfall and revenue loss of 3 lakh crore in GST collections for the States. How will States meet their expenses? This is Economic Anarchy,” he said.
Surjewala said that the Modi Government has filed an affidavit in the Supreme Court conveying its decision to not extend the moratorium on payment of EMI’s by salaried class and the middle class beyond August 31, 2020.
“The Modi Government has refused to provide interest waiver also. All hopes of the middle-class lie shattered,” he added.
“A government that pats its back in the name of farmers and labourers has pushed them to the doorstep of economic ruin and suicide,” he said. (ANI)

Was close to committing suicide during my stint with Yorkshire, says Rafiq

Schools in K’taka to open only after discussion with…