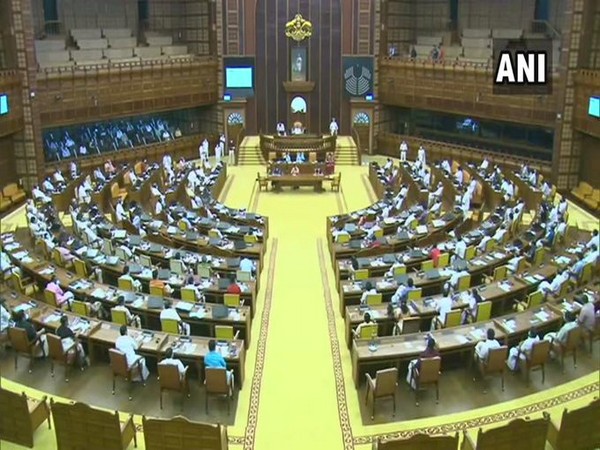 Thiruvananthapuram (Kerala) [India], Aug 25 (ANI): The one-day Kerala assembly session that was held on Monday promising to follow COVID-19 protocols, witnessed dramatic scenes with the opposition led by Congress storming to the Well of the House during a discussion on the no-confidence motion and Chief Minister Pinarayi Vijayan using it as a centre stage to present the Left government’s achievements in four years in a reply that stretched more than three and half hours.
The opposition stormed to the Well of the House shouting slogans interfering the speech of Kerala Chief Minister when the time allotted to ruling bench crossed the time of all the opposition parties combined.
As the Chief Minister chose to touch upon topics ranging from welfare measures carried out by Left government to ‘Pisciculture’, narrating how Kerala would benefit from the newborn fishes that have been released across water streams in the state, the opposition leader interfered saying that Kerala Chief Minister was not addressing the issues raised by the opposition.
“People in Kerala are known for loving fish dishes. But people here are not cultivating fish. The new scheme launched by the Kerala government will address it,” Vijayan said.
Vijayan continued his speech ignoring opposition that raised allegation from gold smuggling case to corruption in Life Mission project intended to provide housing for the poor. “If the opposition has brought in a non-confidence motion they are bound to hear my reply. These are issues concerning people,” he said.
As the legislators from opposition benches stormed to the Well of the House protesting, the speaker urged them to follow COVID-19 protocol and maintain social distancing.
“Please follow social distancing. Don’t come as a group,” said Speaker P. Sreeramakrishnan, against whom the United Democratic Front (UDF) had moved a notice to remove him for his alleged links with gold smuggling accused which was rejected by Speaker saying such “a notice should be moved 14 days prior to convening the Assembly”.
Vijayan started his reply to the no-confidence motion in Kerala Assembly by launching a staunch attack on Congress over the developments in Congress Working Meeting (CWC) in Delhi.
“People do not trust UDF. In Delhi, another non-confidence in AICC is being discussed. Senior Congress leaders are accusing each other of being BJP agents. Kapil Sibal has openly said it and after that retrieved his statement. Congress has hit such a low that they cannot even elect a leader,” he said.
Further attacking the Congress, Vijayan said, “The issues raised by the opposition in Assembly proves that they lack confidence about what they are raising. They do not have unity and there are issues within their front. They have lost the people’s support. They are disturbed by all this. I doubt that they brought the non- confidence motion to cover up all this.”
In a joint Press Conference, opposition parties alleged that the Chief Minister Vijayan chose to beat around the bush, rather than addressing issues raised by the opposition.
“None in history of Kerala Assembly as Chief Minister delivered such a pathetic speech. His intention was that we as opposition should stage a walkout. For it he delivered such a long speech, ignoring all that opposition raised,” said VD Satheesan who moved the non-confidence motion.
Kerala Leader of Opposition Ramesh Chennithala alleged that the government and Chief Minister was immersed in corruption, nepotism and instead of answering charges raised by the opposition was running away after failing with answers. “The people of Kerala will give a befitting reply to Vijayan in the upcoming polls,” he said
The non- confidence motion was defeated 87 votes to 40, with two MLAs from Kerala Congress (M), who are at loggerheads with the UDF, choosing to abstain. (ANI)

Weekly markets reopen in Delhi on a trial basis

How parents can curb teenage drinking and driving