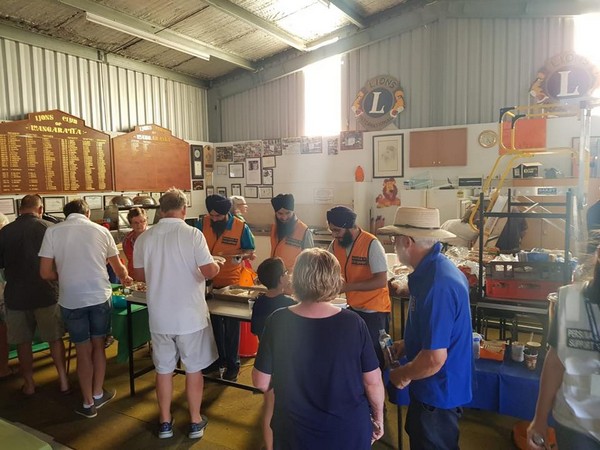 Canberra [Australia], Jan 9 (ANI): The unprecedented scale of the Australian bushfire raging parts of the country for months has sparked an outpouring of generosity from the Sikh community living in the country, with several organisations and individuals alike volunteering in the support efforts by providing free meals, medical support and groceries to the victims, firefighters and other relief workers.
From the collective efforts by the organisations sending teams of volunteers out to the fire-affected region to distribute household essentials, to the individuals, Gurdwaras and multi-cuisine restaurants providing free meals and medical support to those rendered homeless, the states of New South Wales and Victoria have witnessed notable contributions being made by the community at the hour of the need.
One such volunteer, Sukhwinder Kaur, cancelled her first trip back to India in ten years to cook meals for the distressed victims. The 35-year-old had scheduled the trip to visit her sister who is in a coma after she suffered a stroke.
Kaur begins at dawn and cooks until 11 at night for the families forced to flee their homes in East Gippsland.
“I wanted to go to India to see my elder sister who is in a coma after she had a stroke. But then this happened and I realised my first duty is towards the community here where I have lived for so long. If I had left the people here during such a difficult time, I don’t think I could call myself a good human being,” Kaur told Australia’s Special Broadcasting Service (SBS).
“This is my family too and I have a responsibility towards it. I just can’t go while my family is suffering,” she added.
Kaur has taken leave from her job at Australia Post and has been camping at Bairnsdale Oval since the New Year’s eve. She volunteers under Melbourne-based not-for-profit organisation Sikh Volunteers Australia.
Several Sikh organisations, including Australian Sikh Support, Australian Sikh Volunteers, United Sikhs, Khalsa Shaouni Plumpton, Turbans4 Australia, among others, contribute by providing essentials like milk, cereals, biscuits, water, as well as medical supplies like masks, eye drops and sanitary pads to the relief centres set to help fire-ravaged communities.
It has been an honour and a privilege to serve our great nation. We follow the true Aussie spirit of help and mateship. May God bless Australia and its people,” Manpreet Singh Sapra, a member of the Australian Sikh Support.
The communities’ efforts were recently commended by former Indian Cricketer Yuvraj Singh, who described them as a “hope for humanity.”
“Cheers to Australia Sikh Support for coming out at the hour of need and provide the best to the victims of this calamity. Their gesture is really commendable and a hope for the humanity. Let’s all pray for Australia and hope the situation gets under control soon,” wrote Yuvraj on his Facebook page. (ANI)

NATO allies to stand together regardless of US election result: Stoltenberg

Army should stop interfering or there will be no unity in Pakistan: Fazlur Rehman

Prior to 2014, nobody presented their report card, PM Modi changed this: Nadda

Anushka to connect with fans via WhatsApp for…