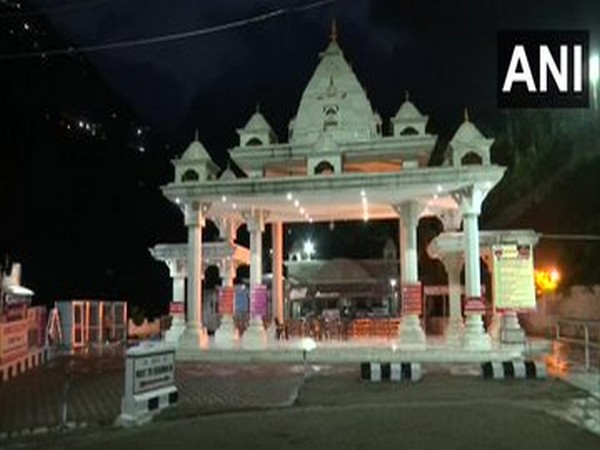 Katra (Jammu and Kashmir) [India], Aug 16 (ANI): Pilgrimage to Mata Vaishno Devi Temple resumed on Sunday, nearly 5 months after it was suspended due to COVID-19.
Only 2,000 people will be allowed to visit the shrine per day.
Expressing excitement, Prashant Sharma, one of the first pilgrims to visit the shrine said, “I’m happy that people can visit the temple once again.”
Sharma informed that the shrine management has made adequate arrangements for the pilgrims keeping COVID-19 pandemic in mind.
“The shrine management has laid out the rules clearly, and pilgrims are also following them properly. It is important to follow rules during the COVID-19 pandemic. If rules are not followed then the darshans will be closed soon,” added Sharma.
Another pilgrim Raman Khajuria said that management is testing people for COVID-19 virus to keep a check if any infected person visited the premises.
“There are sanitiser dispensers at places, thermal screening is done. we’ll also be tested for COVID-19 so that the management gets to know if some infected person came on the premises,” said Khajuria.
The yatra to the shrine, which was suspended from March 18, is resuming from August 16.
Ramesh Kumar, Chief Executive Officer (CEO), Shri Mata Vaishno Devi Shrine Board said on Saturday, that during the first week of the resumption of pilgrimage, there shall be a ceiling of 2,000 pilgrims per day, including 1,900 from within Jammu and Kashmir and the remaining 100 from outside the Union Territory.
“The situation will be reviewed thereafter and the decision will be taken accordingly. Pilgrims will be allowed to undertake the pilgrimage after registration through online mode only in order to avoid any assembly of persons at the Yatra Registration Counters,” said Kumar.
The shrine board will be abiding to health norms induced by the Centre to contain the spread of coronavirus.
The Chief Executive Officer further said that the yatra will move in a uni-directional manner. The traditional route from Katra to Bhawan via Banganga, Adhkuwari and Sanjichhat will be used for going up and Himkoti route-Tarakote Marg will be used for coming back from the Bhawan.
Meanwhile, a massive sanitisation campaign has been launched by the Shrine Board right from Katra en route to Bhawan and in the Bhawan area for ensuring utmost sanitisation and cleanliness before the resumption of the yatra. (ANI)

PM’s cowardice allowed China to take our land, his lies will ensure they keep it: Rahul Gandhi