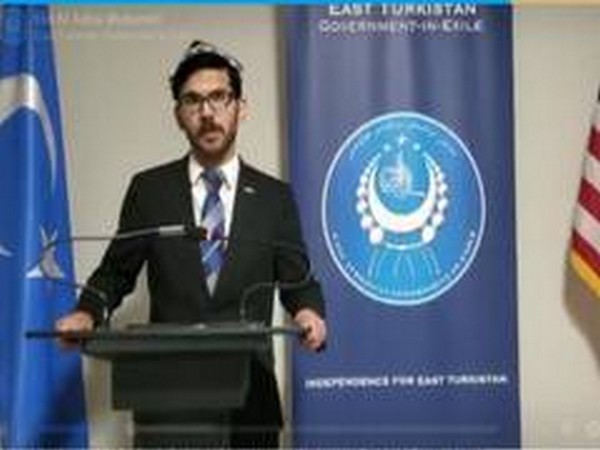 Washington [US], August 4 (ANI): The East Turkistan Government-in-Exile has lauded the United States decision to levy sanctions on the Xinjiang Production and Construction Corps (XPCC), for its role in China’s brutal campaign of colonisation and genocide of minorities.
“The East Turkistan Government in Exile (ETGE) applauds the US Treasury Department for sanctioning the Xinjiang Production and Construction Corps (XPCC), also known as the Bingtuan, for its role in China’s brutal campaign of colonisation and genocide. The US also sanctioned Sun Jinlong, former Party Secretary of the XPCC, and Peng Jiarui, Deputy Party Secretary and Commander of the XPCC,” the government said in a statement on Monday.
Last week, US Secretary of State Michael Pompeo had announced that sanctions have been imposed on XPCC and two of its officials for their connection to serious human rights abuse on the Uyghur community in Xinjiang.
After the sanctions imposed by the US Department of the Treasury, Pompeo urged countries worldwide to condemn the Chinese Communist Party (CCP) for their continuous human rights abuse against its own citizens.
Since 2017, the XPCC has played a crucial role in China’s mass internment of over 3 million Uyghurs, Kazakhs, Kyrgyz and other Turkic peoples in concentration camps, forced labour, forced bio-metric collection, forced population control and sterilisation, and extensive surveillance across East Turkistan, according to East Turkistan government.
The XPCC runs at least 74 labour camps across Occupied East Turkistan, where Uyghurs and other Turkic peoples are used as slave labour.
“The US government’s sanctioning of the XPCC is of great importance as it directly seeks to hold accountable the Chinese entity, which has not only played the most direct role in China’s colonisation and occupation of East Turkistan but also has for decades facilitated the genocide of East Turkistan’s people,” the East Turkistan government said.
“We thank the US government and the Trump Administration for actively working to hold China accountable for its mass atrocities against East Turkistan and its peoples,” it added. (ANI)

Trump says election should end on Nov 3, not weeks later