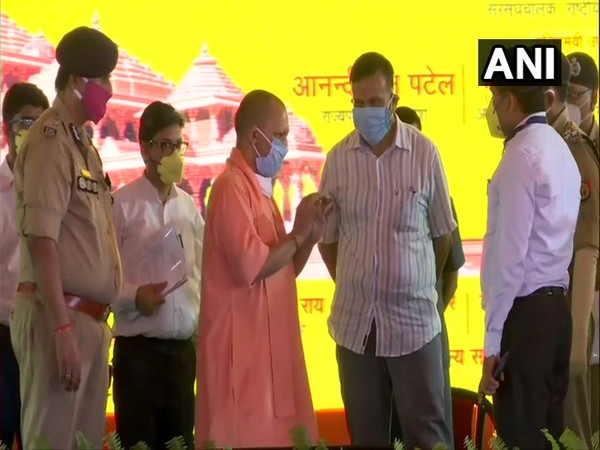 Ayodhya (Uttar Pradesh) [India], August 3 (ANI): Uttar Pradesh Chief Minister Yogi Adityanath on Monday took stock of the preparations ahead of the foundation stone laying ceremony of Ram temple on August 5.
Chief Minister Adityanath surveyed the area and discussed the arrangements for the August 5 event with the officials.
Meanwhile, the Hanumangarhi temple is being sanitised ahead of Prime Minister Narendra Modi’s visit on August 5 for the ‘bhoomi pujan’ of Ram temple.
As the ‘bhoomi pujan’ of Ram temple is all set to take place on August 5 in Ayodhya, as many as 5,100 urns are being prepared by ‘Sanskar Bharti Ayodhya Festival’, which will be placed on the pathway from where Prime Minister Narendra Modi will travel.
The urns have been prepared and are currently being decorated. They have been made on the campus of Saraswati Shishu Temple, Ranopali, Ayodhya.
Entire Ayodhya has been decked up ahead of August 5 when Prime Minister Narendra Modi will lay the foundation stone for construction of the Ram temple. Massive preparations have been made for this occasion and Ayodhya is witnessing a festive atmosphere these days.
The construction work of Ram temple will begin after the foundation stone laying ceremony, in which dignitaries from various political and religious fields are likely to participate along with RSS chief Mohan Bhagwat. (ANI)