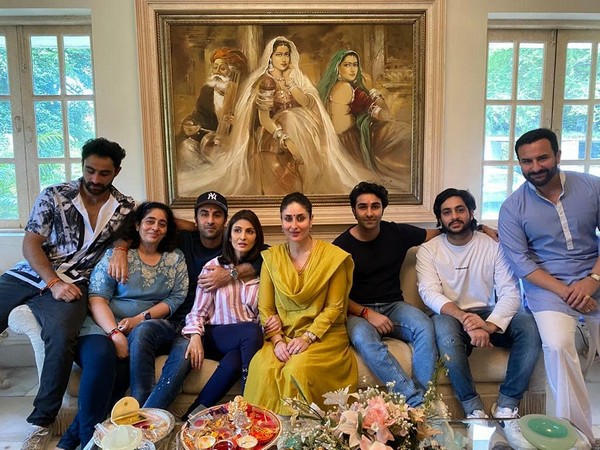 Mumbai (Maharashtra) [India], August 3 (ANI): Missing her sister Karisma Kapoor on special family lunch on Raksha Bandhan, megastar Kareena Kapoor Khan shared a glimpse of the celebration.
The ‘Angrezi Medium’ actor put out a post on Instagram that featured adorable pictures of the Kapoor family’s get together. The picture shared by Kareena features husband Saif Ali Khan and other star family members including Ranbir Kapoor and sister Riddhima Kapoor Sahni, among others, as they sit together on a couch while posing for the family picture. The second picture featured in the post shows the Kapoor brood including senior actor Randhir Kapoor, Babita Kapoor, Ranbir, Saif, Taimur Ali Khan and Alia Bhatt.

In the post, the ‘Jab We Met’ actor also shared an Instagram post of sister Karisma Kapoor. In the video, the ‘Raja Hindustani’ actor said she missed her brothers and sisters. She said, “Happy Rakhi to all my brothers and sisters, missing you all today. Love you so much,” as she sends a flying kiss to them.
Along with the post, Kareena noted, “Family lunch. Miss you Lolo” (along with red heart emojis).
With the post hitting Instagram, celebrity followers including Saif’s sister Soha Ali Khan liked the post that garnered more than 2 lakh likes within an hour of being posted.
The festival of Raksha Bandhan is observed to celebrate the special bond between brothers and sisters. (ANI)

Haven’t confirmed my availability in any league: Irfan Pathan

Shakib has been outstanding for us: Mortaza

Honour to play with you and against you: Bumrah tells…