Ahead of ‘bhoomi pujan’ of Ram temple, 5,100 urns are being prepared for decoration 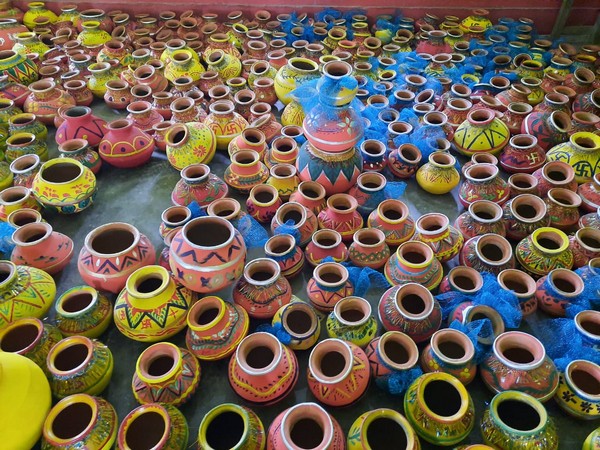 Ayodhya (Uttar Pradesh) [India], August 3 (ANI): As the ‘bhoomi pujan’ of Ram temple is all set to take place on August 5 in Ayodhya, as many as 5,100 urns are being prepared by ‘Sanskar Bharti Ayodhya Festival’, which will be placed on the pathway from where Prime Minister Narendra Modi will travel.
The urns have been prepared and are currently being decorated. They have been made on the campus of Saraswati Shishu Temple, Ranopali, Ayodhya.
“Everyone is engaged in making arrangements for ‘bhoomi pujan’ of the Ram temple. Everyone here wishes to decorate Ayodhya just like Diwali for the occasion of ‘bhoomi pujan’, when PM Modi will initiate the religious ceremony by performing puja at Hanumangarhi temple,” said Ram Bahadur Singh, Principal, Saraswati Shishu Mandir school.
“Here, as many as 5,100 urns are being decorated and they will be placed on the path from Saket Mahavidhalaya to Ram Janmbhoomi with diyas being placed inside them. Harish Chandra Srivastava is doing the work of making these urns. Similarly, cultural programs, artwork and paintings are also being prepared,” he added.
The urns are also being prepared at three other places including Nanak Pura, Sahadat Ganj and Haiderganj.
Entire Ayodhya has been decked up ahead of August 5 when Prime Minister Narendra Modi will lay the foundation stone for construction of the Ram temple. Massive preparations have been made for this occasion and Ayodhya is witnessing a festive atmosphere these days.
The construction work of Ram temple will begin after the foundation stone laying ceremony, in which dignitaries from various political and religious fields are likely to participate along with RSS chief Mohan Bhagwat. (ANI)

Trump says election should end on Nov 3, not weeks later

HC to hear plea on cancellation of Kanhaiya bail