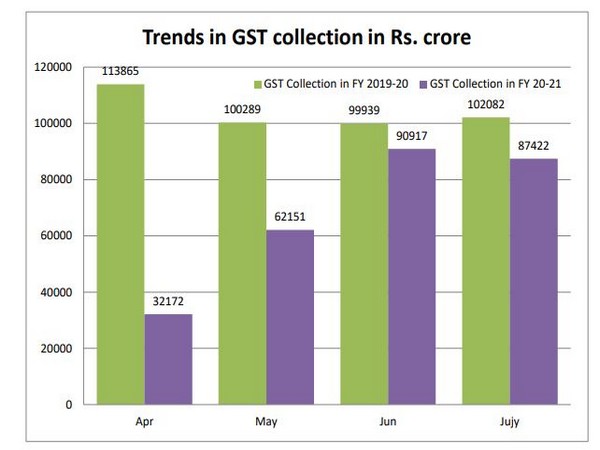 New Delhi [India], August 1 (ANI): The Goods and Services Tax (GST) revenue collections in July totalled Rs 87,422 crore, 14 per cent less than in the year-ago period as economic activities slowed due to COVID-19 led countrywide lockdown, the government said on Saturday.
Of the total GST revenue collected, Central Goods and Service Tax (CGST) is Rs 16,147 crore, State Goods and Service Tax (SGST) is Rs 21,418 crore and Integrated Goods and Service Tax (IGST) is Rs 42,592 cr (including Rs 20,324 cr collected on import of goods) and cess is Rs 7,265 cr (including Rs 807 cr collected on import of goods).
The government has settled Rs 23,320 crore to CGST and Rs 18,838 crore to SGST from IGST as regular settlement, according to a statement released by the Ministry of Finance.
The total revenue earned by Central government and the state governments after regular settlement in the month of July is Rs 39,467 crore for CGST and Rs 40,256 crore for the SGST.
“The revenues for the month are 86 per cent of the GST revenues in the same month last year. During the month, the revenues from import of goods were 84 per cent and revenues from domestic transaction (including import of services) were 96 per cent of the revenues from these sources during the same month last year,” said the statement.
“Revenues for the last month were higher than the current month. However, it is important to note that during the previous month, a large number of taxpayers also paid taxes pertaining to February, March and April 2020 on account of the relief provided due to COVID-19,” it added.
It may also be noted that the taxpayers with turnover less than Rs 5 crore continue to enjoy relaxation in the filing of returns till September 2020, said the statement. (ANI)

Higher COVID-19 recovery rate due to Yoga, use of traditional methods to boost immunity: Ramdev

Mamata thanks FIFA, AIFF for U-17 World Cup final