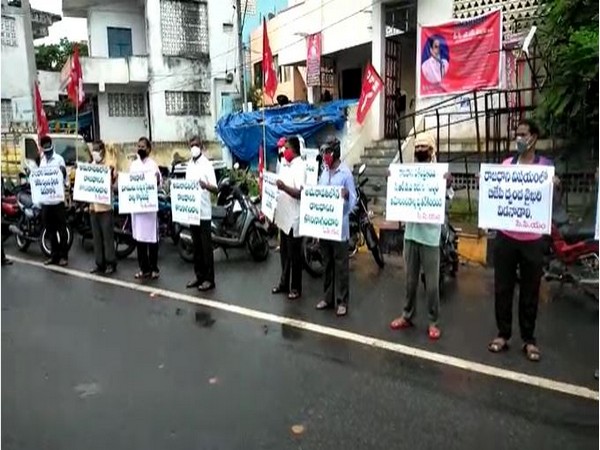 Vijayawada (Andhra Pradesh) [India], Aug 1 (ANI): The Communist Party of India (Marxist) on Saturday held a protest opposing the state governor for giving assent to capital decentralisation Bills in Andhra Pradesh.
CPM leader C H Baburao led the protest rally along with the other leaders and cadre in the city.
While speaking on the issue, C H Baburao said that YSR Congress Party (YSRCP) stood as a cheater and Bharatiya Janata Party (BJP) as a traitor in the capital decentralisation issue.
Baburao said, “When Telugu Desam Party (TDP) was in power, TDP, BJP and YSRCP had unanimously decided Amaravati as Andhra Pradesh’s capital. YSRCP chief Jagan is changing his words and now cheating the public.”
Calling the governor’s Bill approval undemocratic, the leader said, “Governor approving those Bills is undemocratic.”
He questioned and said, “Will the capital change whenever the government changes? Neither YSRCP nor BJP have any commitment to the development of backward North Andhra and Rayalaseema regions. BJP did not obey the reorganisation Act by not implementing the package like that of the ‘Buldelkhand package’. They (BJP) did not even release funds for the state. Thus, BJP did gross injustice to North Andhra and Rayalaseema regions. But neither YSRCP nor TDP are raising voice on that issue.”
Digging deep into the issue, Baburao said, “BJP’s betrayal of the state started when Modi gave mere mirth and water to Amaravati instead of giving funds. BJP again cheated the farmers of the Amaravati region by saying that their party will stand with them and Amaravati will not be shifted from being capital. YSRCP and BJP have tacit; they colluded at the cost of interest of people. TDP is not raising voice against BJP’s cheating while the YSRCP government is acting irresponsibly.”
“At least now the government should rethink and continue Amaravati as the sole capital and develop Rayalaseema and North Andhra, the backward regions of the state. YSRCP government is so adamant that it has left the public health concerns due to corona at bay and playing with the lives of people on the name of capital shifting,” the leader said.
“CPM’s stand is clear that changing the capital whenever the state government changes, is not correct. CPM will continue the fight for Amaravati as the sole capital and for development package for North Andhra and Rayalaseema regions. Amaravati is not the issue of local farmers alone, but of all people of the state. CPM will stand by farmers and the poor, and will protest against the betrayal of BJP and YSRCP,” he added.
The state government issued two gazette notifications regarding the Andhra Pradesh Decentralisation and Inclusive Development of All Regions Act 2020 and the Capital Region Development Authority (Repeal) Act 2020 on Friday. It came after both the Bills were given assent by state governor Biswabhusan Harichandan on Friday. (ANI)