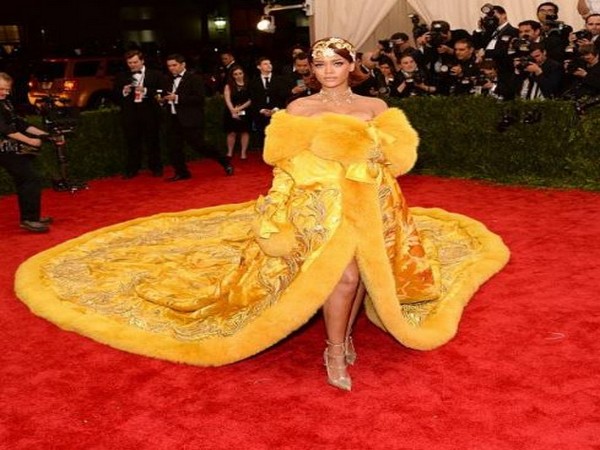 Washington D.C. [USA], July 31 (ANI): Pop star Rihanna recently dished on her iconic 2015 Met Gala mustard yellow ensemble.
According to Page Six, the 32-year-old makeup mogul was instantly crowned the best-dressed guest at the 2015 Met Gala when she hit the red carpet in a show-stopping yellow dress by Chinese designer Guo Pei.
The couture creation, featuring fur trim and a football field-sized train, is arguably one of her most iconic looks of all time.
But during an ‘Access Hollywood’ interview to promote her new Fenty Skin line, Rihanna revealed that the outfit presented plenty of problems at the star-studded affair, reported Page Six.
The ‘Love the way you lie’ songstress said, “That night, the choreography of getting in the car and getting out, like, we had to choreograph it. Who sits at the door? Where does the coat go? Where do I sit?”
Riri continued, “I remember being so scared to get out of that car because I felt like, ‘I’m doing too much.’ I was driving past the red carpet, and I was just seeing, like, gowns and I was like, ‘Oh my god, I’m a clown. People are going to laugh at me. This is like, too much.’ I thought that. I circled like, three times, I’m not even joking. And finally, I was like, ‘Whatever, let’s go. Let’s just go. Let’s just go.’ I know. I don’t regret it.'”
Of course, it all worked out, further cementing Rihanna’s status as a style icon and birthing countless memes.
The superstar also recalled one of the viral memes at the time, “The frying pan with the egg? Legendary, legendary.” (ANI)

Beginning of Ram temple construction a moment of pride: President address to nation…

Russia to pay bonuses to athletes barred from Rio