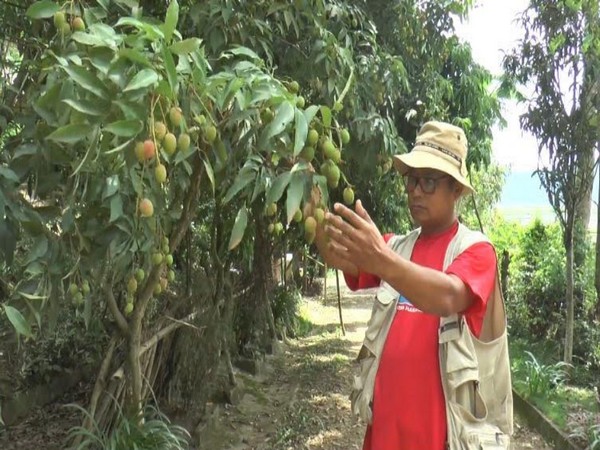 Imphal (Manipur) [India], July 30 (ANI): In an effort to boost eco-tourism, a farmer from Manipur, Salam Somorendro, is planting a variety of fruits and medicinal plant in his orchard. He is the first orchard farmer in the state who is preparing to produce different varieties of organic fruits.
Located at Wangkhem at the foothills of Ngariyan Hill Range in Manipur, Somorendro’s farm known as ‘Sera Garden’ is also one of the most visited recreational destination parks in Manipur.
Speaking about the name of the garden, Salam Somorendro said, “The former Chief Secretary of Manipur Jarnail Singh and his wife Seraphina Singh is a dear friend. Inspired by their honesty and goodness I named this garden as ‘Sera Garden’.”
The park hosts various saplings of Chikoo or sapota, Litchi, imported sweet tiny mango, and other varieties of medicinal plants.
Simarose, daughter of the progressive farmer noted that “seeing greenery, and nature” makes her feel good and wants to plant ” extinct plant species”.
With the income earned by selling these fruits, Somorendro has been developing his orchard into a destination eco-tourism park.
“Manipur is endowed with rich biodiversity and good soil. I wanted to grow the plants that are easily available in our state. Also, I wanted to grow lant other medicinal plants with crafting and layering (techniques). So that’s how I started this orchard,” he said.
Nungshitombi, the wife is Somorendro, explained it is “tiring” as they spend “five hours” in the orchard, and are also planting “chiku, guava, mausambi, orange…all kinds of fruits.”
However, Somorendro said he is not concerned with the earnings from the garden and fruits for now, but he feels happy to see new birds coming every year in the orchard. (ANI)

“It was the public’s fault, not of the police”, says Sharif,…

CM Gehlot assures kin of probe into deaths of 11 migrants

In the absence of roads, family members carry woman to hospital on cot

Oil India surveys 2,756 families for assessment of damage for compensation

Kelly Ripa, Mark Consuelos and their kids dish on their wild, wonderful family

‘Youth should feel free to be themselves’: Manushi Chhillar on International Youth Day