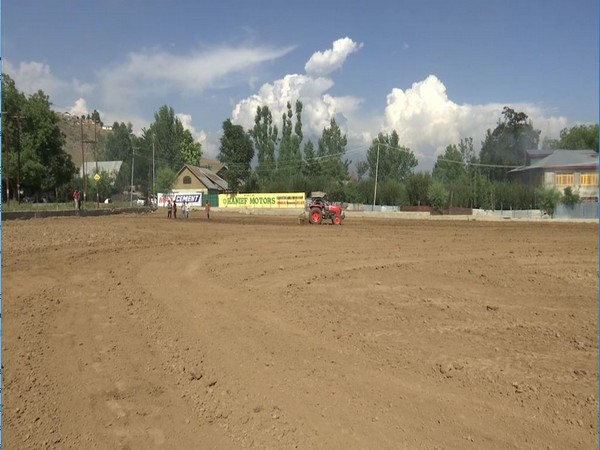 Ganderbal (Jammu and Kashmir) [India], July 30 (ANI): To channelise the energy of the sports-loving youth in the right direction, construction of a new playground is in full swing at Wakura village in Ganderbal district of Jammu and Kashmir.
While speaking to ANI, Ghulam Mohd Malik, Chairman of Block Development Council, Wakura said this playground will play a vital role to boost sports activities and help youths of the district to show their hidden talent in overall sports.
“It has been eight months that I have become chairman of the block. I felt that the youth in this area are good at sports and they are in need of a good playground. The playground is being constructed for an amount of Rs 13.24 lakhs,” Malik said.
Malik said funds are being released regularly since Jammu and Kashmir became Union Territory after the abrogation of Article 370 on August 5 last year.
“This playground will play an important role to help the youths of the district to show their talent in sports,” he said.
The local players said they are happy that the government is spending a good amount of money to improve the sports infrastructure in the valley including the Ganderbal district.
“It is a very good initiative by the government. Construction is in the full swing. Authorities have promised to improve facilities and they are continuously doing it. From last August work has been going in full speed and I hope, it will be completed soon. We can play all types of games here after completion of work,” said Adil Ahmad, one of the local players.
Another local player, Umar Farooq said, “It is a big initiative to improve facilities over here. We had a big playground but a mandi has been started there, so we had no playgrounds. It is good that the government is improving the facilities here.”
“From the last one year, the playground is being developed. In a week it will be fully operational and we are prepared to play any kind of sports including cricket, football, volleyball and other games,” he added.
Since the last few years, Kashmiri youths including boys and girl — like international cricketer and J-K Ranji Trophy skipper Parvez Rasool, footballer Afshan Ashiq, footballer Mehrajuddin Wadoo, cricketer Abdul Samad — are showing good performance in sports at the national and international levels.
But due to lack of basic facilities and good infrastructure including playgrounds, there were a lot of problems, which resulted in the government starting the construction work of this playing field.
Parvez Khan, a local resident said the youth of three villages are dependent on this particular playground.
“It is near the Highway and fruit mandi. It will help the youths to come to the ground for sports and also help in tackling growing drug menace,” he said.
Authorities have almost completed the basic work including the filling process of the ground and within a short period of time, this playing field will be given to sports-loving youths of Ganderbal. (ANI)

Series of tremors hit Vanuatu archipelago in the Pacific

Govt trying to create five crore jobs in next 5 years:…