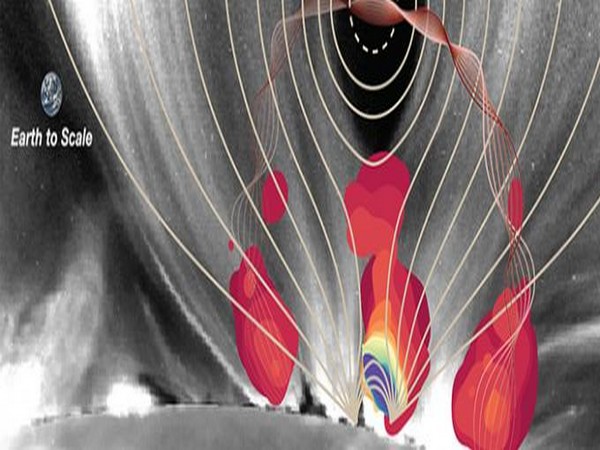 Massachusetts [USA], July 27 (ANI): Scientists from the Centre for Astrophysics, Harvard and Smithsonian and the New Jersey Institute of Technology on Monday announced the first successful measurement and characterisation of the ‘central engine’ of a large solar flare.
The findings have been published in the journal Nature Astronomy, reveal the source of the intense energy powering solar flares.
According to the study — which closely examined a large solar flare accompanied by a powerful eruption captured on September 10, 2017, by the NJIT’s Owens Valley Solar Array (EOVSA), at microwaves — the intense energy powering the flare is the result of an enormous electric current ‘sheet’ stretching more than 40,000 kilometres — greater than the length of three Earths placed side-by-side — through the core flaring region, where opposing magnetic field lines approach, break, and reconnect.
“During large eruptions on the Sun, particles such as electrons can get accelerated to high energies. How exactly this happens is not clearly understood, but it is thought to be related to the Sun’s magnetic field,” said Kathy Reeves, astrophysicist, CfA, and co-author of the study.
“It has long been suggested that the sudden release of magnetic energy through the reconnection current sheet is responsible for these major eruptions, yet there has been no measurement of its magnetic properties,” said Bin Chen, professor of physics at NJIT and lead author on the study.
“With this study, we have finally measured the details of the magnetic field of a current sheet for the first time, giving us a new understanding of the central engine of the Sun’s solar flares,” added Chen.
Measurements were taken during the study also indicate a magnetic, bottle-like structure located at the top of the flare’s loop-shaped base, or flare arcade, at a height of nearly 20,000 kilometres above the surface of the Sun. The study suggests that this is the primary site where a solar flare’s highly energetic electrons are trapped and accelerated to nearly the speed of light.
“We found that there were a lot of accelerated particles just above the bright, flaring loops,” said Reeves.
“The microwaves, coupled with modeling, tells us there is a minimum in the magnetic field at the location where we see the most accelerated particles, and a strong magnetic field in the linear, sheet-like structure further above the loops,” added Reeves.
The sheet-like structure and the loops seem to be working in concert, with significant magnetic energy being pumped into the current sheet at an estimated rate of 10-100 billion trillion joules per second, and 99 percent of the flare’s relativistic electrons were observed congregating at the magnetic bottle.
“While the current sheet seems to be the place where the energy is released to get the ball rolling, most of the electron acceleration appears to be occurring in this other location, the magnetic bottle,” said Dale Gary, director, EOVSA and co-author on the study.
“Others have proposed such a structure in solar flares before, but we can truly see it now in the numbers. What our data showed was a special location at the bottom of the current sheet — the magnetic bottle — appears to be crucial in producing or confining the relativistic electrons,” Chen said.
The study results were achieved through a combination of microwave observations from EOVSA and extreme ultra-violet imaging observations from the Smithsonian Astrophysical Observatory’s Atmospheric Imaging Assembly on the Solar Dynamics Observatory (SDO).
The observations were combined with analytical and numerical modeling — based on a 1990s theoretical model of solar flare physics — to help scientists understand the structure of the magnetic field during a large solar eruption.
“Our model was used for computing the physics of the magnetic forces during this eruption, which manifests as a highly twisted ‘rope’ of magnetic field lines, or magnetic flux rope,” said Reeves.
“It is remarkable that this complicated process can be captured by a straightforward analytical model, and that the predicted and measured magnetic fields match so well,” added Reeves.
Performed by Chengcai Shen, astrophysicist, CfA, the simulations allowed the team to resolve the thin reconnection current sheet and capture it in detail.
“Our simulation results match both the theoretical prediction on magnetic field configuration during a solar eruption and reproduce a set of observable features from this particular flare, including magnetic strength and plasma inflow/outflows around the reconnecting current sheet. It is a powerful tool to compare theoretical expectations and observations in detail,” said Shen.
For the team, the study provides answers to long-unanswered questions about the Sun and its solar flares.
“The place where all the energy is stored and released in solar flares has been invisible until now,” said Gary.
“To play on a term from cosmology, it is the Sun’s ‘dark energy problem,’ and previously we’ve had to infer indirectly that the flare’s magnetic reconnection sheet existed,” added Gary.
For solar physics, the measurements represent a better understanding of the Sun, as well as providing a path to revealing the truth behind the current sheet, and the magnetic bottle and its role in particle acceleration.
“There are certainly huge prospects out there for us to study that address these fundamental questions,” said Shen.
The current study builds on the team’s quantitative measurements of the evolving magnetic field strength directly follow a solar flare’s ignition, published in Science earlier this year. (ANI)

Anjani Kumar concurrently accredited as next Ambassador to Mauritania

125 people test positive for COVID-19 in UP, count reaches…