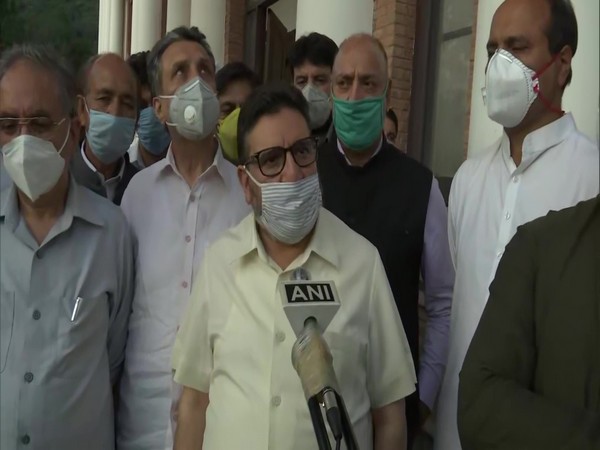 Srinagar (Jammu and Kashmir), July 19 (ANI): A delegation of Jammu and Kashmir Apni Party (JKAP) led by party president Syed Mohammed Altaf Bukhari on Saturday called on Lieutenant Governor Girish Chandra Murmu to highlight socio-political and economic issues faced by the people of Union Territory.
A party release said that JKAP leaders held detailed discussions on various issues confronting the people especially after the implementation of J&K Reorganization Act, 2019.
“We raised several issues including restoration of statehood, the release of political detainees tourism & withdrawal of FIRs against youth,” Bukhari said to ANI,
The release said the meeting was held in an amicable atmosphere and the Lt Governor gave a patient hearing to the delegation and assured all possible support from the Government to redress the issues confronting people of Jammu and Kashmir.
A memorandum highlighting some of the important political and socio-economic issues faced by the people of the state was submitted to the Lt. Governor.
The delegation was assured that few of the demands mentioned in the memorandum which are exclusively within the jurisdiction of the union government would be forwarded to the concerned quarters with specific recommendations from the J&K administration. (ANI)

Set up body for power balance among 3 organs, govt advised

After day of clashes, farmers offered protest site at Burari

NIA gets custody of PDP youth wing chief for 15 days

No place for disruption, be it in Parliament or state assemblies: LS Speaker Om Birla

Centre ready to discuss all issues with farmers: Tomar

Sub-zero temperature at several places in Kashmir, Pahalgam coldest at minus 6.5 deg celsius

India assures Vietnam of all help in military modernisation

IPL will decide India’s No.4, Pant can do job: Ganguly

Sunny Leone to perform in Bahrain for 1st time