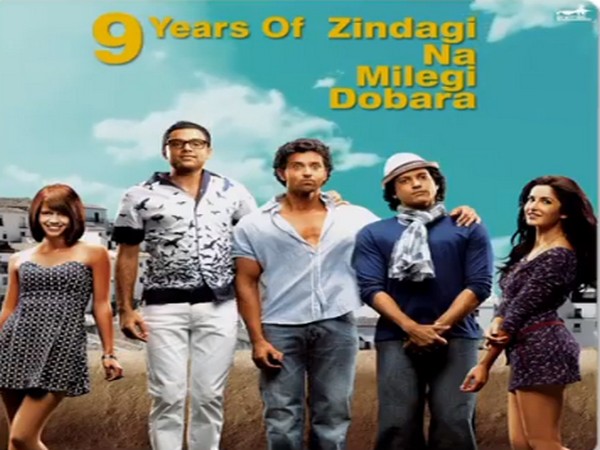 New Delhi [India], July 15 (ANI): Posting a GIF celebrating nine years of his Blockbuster hit ‘Zindagi Na Milegi Dobara,’ actor Farhan Akhtar on Wednesday expressed gratitude for being able to experience the film.
Akhtar took to social media to post the GIF which features the ensemble cast of the film including him, Hrithik Roshan, Abhay Deol, Katrina Kaif and Kalki Koechlin.
He complimented the post with a short yet meaningful note on how he misses every aspect of the film, from the shoot to the crew.
“Miss this shoot. Miss the crew. Miss their madness. Forever grateful to the universe for the experience of this film and for the love you continue to show it. Big hug. #9YearsOfZNMD,” he wrote in the caption.
Akhtar’s co-star from the film, Katrina Kaif, dropped two heart emojis and commented, “The Best,” on the post.
Earlier in the day, Akhtar’s sister and director of the film, Zoya Akhtar, had posted a behind the scene picture from the sets of the film and got nostalgic about the superhit film.
‘Zindagi Na Milegi Dobara’ is an adventure drama with an ensemble cast of Hrithik Roshan, Farhan Akhtar, Abhay Deol, Katrina Kaif, Kalki Koechlin and Naseeruddin Shah.
The critically acclaimed film was released in 2011 and was a major hit at the box office. (ANI)