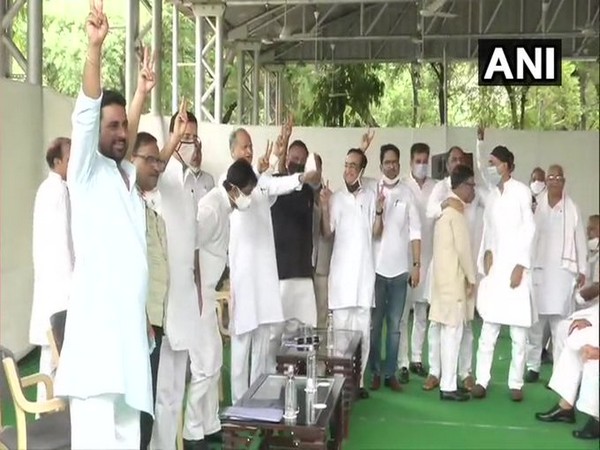 Jaipur (Rajasthan) [India], July 13 (ANI): After the Congress Legislature Party (CLP) meeting, Chief Minister Ashok Gehlot, party leaders and MLAs flashed a victory sign, apparently expressing confidence that their government has the requisite majority in the Assembly.
Leaders and MLAs gathered at Gehlot’s residence for the meeting.
Over 90 MLAs were present at Gehlot ‘s residence in Jaipur, for the CLP meeting, said sources.
Earlier, senior Congress leader and spokesperson Randeep Singh Surjewala said that the Gehlot-led state government is stable and will complete the full term.
He asserted that Congress held a discussion with Rajasthan Deputy Chief Minister Sachin Pilot several times in the last 48 hours.
The crisis in Rajasthan Congress intensified with Gehlot and his deputy Sachin Pilot at loggerheads. While Gehlot is blaming BJP for trying to destabilise the state government by poaching MLAs, Pilot is camping in Delhi to speak to the party leadership regarding the political turmoil in the state.
Congress has 107 MLAs and the Gehlot government is supported by 10 Independent MLAs and two each from the Communist Party of India (Marxist) and the Bharatiya Tribal Party while BJP has 72 seats in the 200-member Assembly.
As many as 30 Congress MLAs and some independent legislators who are in touch with Sachin Pilot have pledged their support to him and have vouched to stand by whatever decision he takes, sources said.
BJP has claimed that the Ashok Gehlot-led government has lost the majority in the state
“Sachin Pilot was the rightful candidate for the post of Rajasthan Chief Minister but Ashok Gehlot took the charge; a conflict in the party began since then. What is happening today is the result of that conflict. The state government has lost the majority,” Rajasthan BJP President Satish Punia said today. (ANI)

Soy, wheat proteins helpful for building aging muscles, but not as potent as animal protein

Chroma by Savannah College of Art and Design: 2017 Best of…