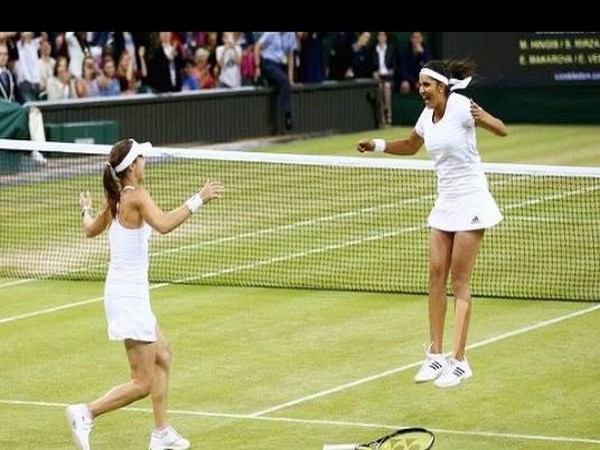 New Delhi [India], July 12 (ANI): On this day in 2015, the pair of Sania Mirza and Martina Hingis won the women’s doubles title at Wimbledon, with Mirza securing her maiden All-England title.
It was on July 12, 2015, when the two won the women’s doubles title at Wimbledon. It was Hingis’ first Wimbledon title since winning the ladies singles title way back in 1997.
The pair defeated the then second-seeded Russian pair of Elena Vesnina and Ekaterina Makarova 5-7, 7-6(4), 7-5 to script their first Grand Slam as a team.
A closely fought affair, the Russians had displayed splendid court action to win the first set. However, Mirza and Hingis staged a remarkable comeback in the second and third set to win the summit clash.
The match had to be paused for ten minutes in between due to bad light. The tennis action resumed after the roof on the Central Court was closed and the lights were turned on.
As the match recommenced, Mirza and Hingis did not miss a beat and ended up winning the title.
Earlier this year, Mirza brought India its first-ever Fed Cup heart award in the Asia/Oceania category after getting more than 10,000 votes out of the total 16,985 votes cast for this year’s three regional Group I nominees.
This year, Mirza had also staged a winning comeback to the tennis court in the Hobart International with Kichenok. She along with her partner Kichenok defeated Zhang Shuai and Peng Shuai of China 6-4, 6-4 in the finals of the Hobart International tournament.
It was Mirza’s first tournament since she gave birth to son Izhaan. It was also her 42nd WTA doubles title.
Before this tournament, the 33-year-old had last played at China Open in October 2017. (ANI)