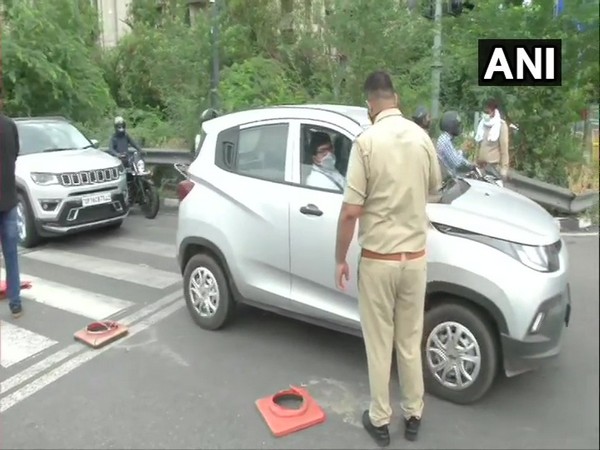 Noida (Uttar Pradesh) [India], July 11 (ANI): With lockdown being imposed again in Uttar Pradesh in view of the rising COVID-19 cases, the police have ramped up vigilance on the Delhi-Noida border on Saturday. Police is only allowing commuters to move ahead after checking their identity cards.
The lockdown in the state started from 10 pm Friday night, which would continue till July 13, 5 am.
Many were finding it tough to move to their destination as they did not have any e-pass with them. “I tried applying for an e-pass but there is no option for it on the official website of the Uttar Police government,” a commuter said while speaking to ANI.
In its order on imposing lockdown, the state government had said all shops and offices across Uttar Pradesh will remain closed during this period. Only shops selling essential items would be allowed to remain opened, for the stipulated time.
Cities across the state remain deserted. Only vehicles carrying essential items were allowed to move. People were out only to buy necessary items but mostly they stayed indoors. The police sent back those who were found roaming around on roads.
According to the Union health ministry, there are currently 32,362 confirmed cases in Uttar Pradesh, out of them 21,127 patients were recovered and 862 have lost their lives due to COVID-19. (ANI)