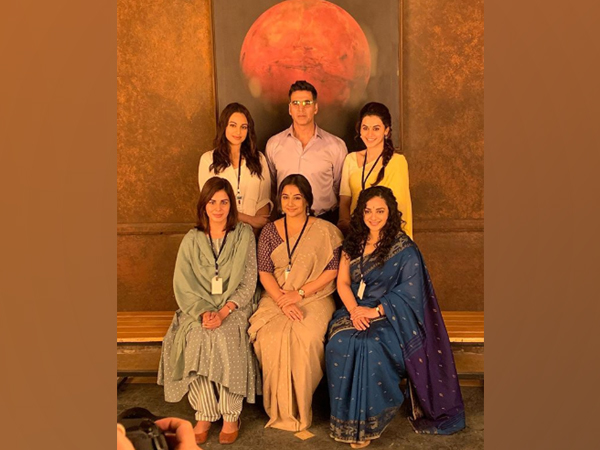 New Delhi [India], July 10 (ANI): Sharing a picture of the ensemble cast of her hit sci-fi film ‘Mission Mangal,’ actor Taapsee Pannu on Friday revealed the two major reasons that made her agree to be a part of the film.
The ‘Pink’ actor took to Instagram to post the picture of the cast featuring her, Akshay Kumar Vidya Balan, Sonakshi Sinha, Kirti Kulhari and Nithya Menen.
She penned down a long caption along with the post sharing that the picture that she posted was from one of the first few days of the shoot.
“One of the first few days of Mission Mangal shoot. I remember how excited we all were to work with each other. This set was no less than a happy land of people who really wanted to create something we can all be proud of,” she wrote in the caption.
Further in the caption, Pannu revealed that she agreed to work in the film because she wanted to be a part of the “beautiful” ensemble of actors and for because she wanted to be a part of the story.
“I remember I said yes to this film for 2 major reasons, one was coz I wanted to be a part of this story which is something to cherish for years to come,” she wrote.
“Secondly I wanted to be a part of this beautiful ensemble of actors I know will have energy worth celebrating every moment. #Throwback #Archive #QuarantinePost,” she added.
Taapsee has been long sharing anecdotes and memories associated with her film shoots ever since the COVID induced lockdown was imposed. (ANI)

Person I looked up to, wanted to emulate: Tendulkar extends birthday wishes to Sunil Gavaskar