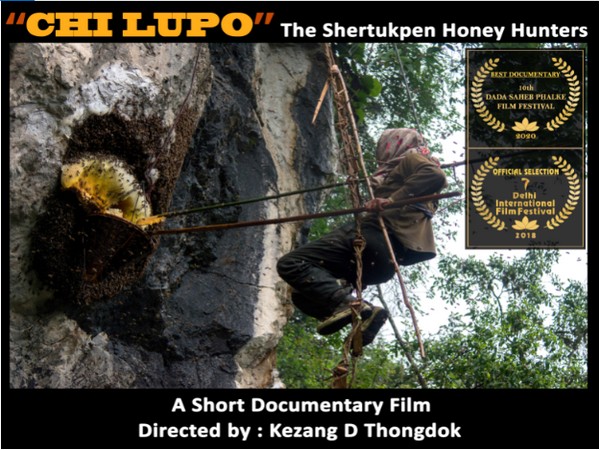 Itanagar (Arunachal Pradesh) [India], July 10 (ANI): Honey hunting has been an integral part of Arunachal Pradesh’s Shertukpen Community, but with modernisation–the indigenous practice of honey hunting is slowly slithering away with each passing day. However, to keep the tradition alive Kezang D Thongdok, an independent filmmaker, not only documented the process of honey hunting but has also bagged the prestigious Dadasaheb Phalke Award 2020 for the same.
Thongdok’s short documentary ‘Chi Lupo’ artfully sketches the custom of honey hunting practised in the Shertukpen community wherein ‘Chi’ means honey and ‘Lupo’ means hunters
Honey is an integral part of this community and is used for preparing various delicacies and valued for medicinal properties. The men of the community gather together for the hunting expedition during the winter in October and November.
A local honey maker shared how the age-old tradition is losing its relevance, “Nowadays, the younger generations do not take interest in honey hunting. It is a part of our culture and Sang Chewang Dinglow is one of the best honey hunters alive now. I wish to go honey hunting but my age doesn’t permit me.”
“There are only a few honey hunters left in the community but each one of them is growing old. Saving this ancestral tradition has become the need of the hour,” he added.
Before embarking on their journey, the hunters don themselves in indigenous bee suits to protect themselves from the sting of the wild bees. Trekking and climbing through the treacherous paths and dense forest, bee hunting is surely not for faint hearts.
While speaking about his inspiration to create the documentary, Thongdok said, “In our community, honey harvesting is a traditional practice. Now in the modern times, hardly four-five honey hunters are left. Hardly three honey hunters are active nowadays, rest have aged to 60-70 years old.”
“I think in the coming three-four years, the practise of honey hunting will almost come to a stop forever. That is why we decided to document honey hunting. This will also help our future generation to know about honey hunting,” added Thongdok.
Thongdok’s attempt to depict and preserve the age-old tradition of honey hunting amongst the Shertukpens bagged him the prestigious Dada Saheb Phalke Award this year. For him, winning the award seemed far-fetched as it was his first time submitting his work in the film festival.
Sharing his overwhelming experience and the unexpected win, Thongdok said, “Due to the pandemic, the event could not be held and everything was declared online. When I got a mail about the selection of my documentary, I was overwhelmed with joy and my family members congratulated me. Getting selected for the award was enough for me. So, I was not expecting to win at all.”
Presently, Thongdok is working on his new project, a documentary film titled ‘Khiksaba’, an unexplored festival of Shertukpen tribe. (ANI)

Hollywood hard if you have integrity: Robin Wright