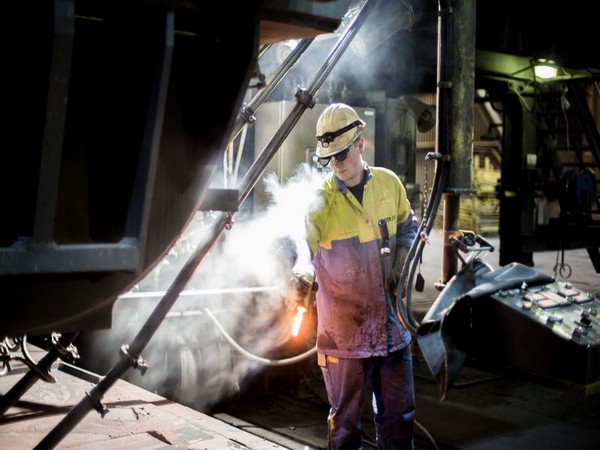 Mumbai (Maharashtra) [India], July 9 (ANI): Tata Steel said on Thursday its production and sales volumes in the first quarter ended March were lower as the outbreak of COVID-19 and ensuing mobility restrictions severally impacted industrial activity and consumer sentiment across all geographies.
The production volumes in India fell to 2.99 million tonnes in Q1 FY21 from 4.5 million tonnes in Q1 FY20, in Europe to 2.14 million tonnes from 2.65 million tonnes and in southeast Asia to 0.39 million tonnes from 0.57 million tonnes.
On the other hand, sales volumes in India were down to 2.92 million tonnes from 3.96 million tonnes in Q1FY20, in Europe to 1.94 million tonnes from 2.26 million tonnes and in southeast Asia to 0.42 million tonnes from 0.62 million tonnes.
In India, capacity utilisation of upstream facilities was adjusted to about 50 per cent level in April while downstream units were closed.
“With the phased opening of the economy, utilisation levels have been ramped up gradually to around 80 per cent level by end of June. Downstream facilities have also been restarted and are being ramped up progressively, the company said in a statement.
To counter the closure of the Indian markets in April and May, exports were ramped up significantly by tapping new markets and improving the supply chain capability and will constitute around 50 per cent of total sales volume in Q1 FY21.
While April and May sales were lower, sales improved significantly in June as economic activity resumed in India. With the continued opening of the economy and the improvement in domestic demand, the proportion of domestic sales will increase from Q2.
While urban markets are showing slow recovery, retail sales — especially in rural markets — are seeing an improvement in demand.
The company said while Europe did not impose a complete lockdown, the weak macroeconomic situation was further impacted by the Covid-19 outbreak. In line with this environment, production levels in Europe were ramped down to around 70 per cent utilisation.
Key steel-consuming sectors such as automotive and construction sector continue to be under pressure though the demand for packaging material has been robust.
“Tata Steel is closely monitoring the situation and taking appropriate actions as per the directions issued by the regulatory authorities from time to time keeping in view the health and safety of its employees and the community and the interests of its customers and other stakeholders,” it said.
“Tata Steel continues to stay focused on managing costs and working capital and ensuring adequate liquidity.”
Tata Steel group is among the top global steel companies with an annual crude steel capacity of 34 million tonnes per annum. Excluding Southeast Asia operations, it recorded a consolidated turnover of 19.7 billion dollars in the financial year ending March 31.

Teleworking is not working for poor, young and women: IMF