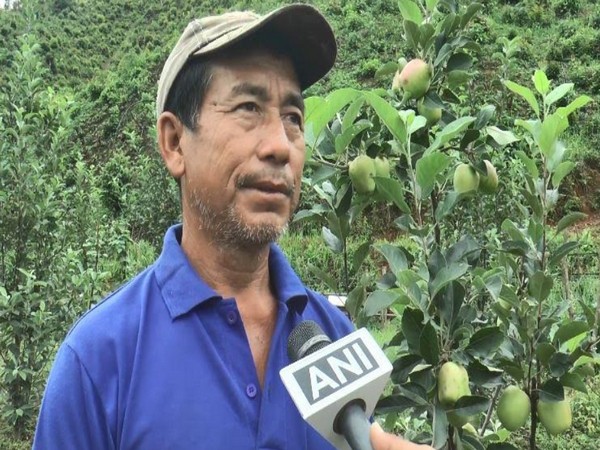 Imphal (Manipur) [India], July 9 (ANI): Apple farming can be quite tricky, given its need for temperate climates. However, Lairenlakpam Indrajit Meetei, a farmer from Manipur, has been successful in cultivating a variety of apples in his orchard, that too, in a span of one year.
The apple framer, from the remote village of Yumnam Khunou Awang Leikai in Manipur, started his cultivation on February 8 2019 on a trial basis with only 49 saplings after he was introduced to National Innovation Foundation- India (NIF) member Laishram Yelhounganba.
“I was informed by experts about the mixed cropping of trees. They taught us the process of pollination and its importance. Since this is my first experience, I am not very definite about it. After a year or two, I will get to know more about this cultivation,” said Indrajit.
To study the suitability and adaptability of the HRMN-99 in various agro-climatic conditions of the country, National Innovation Foundation- India (NIF) has transplanted around 10,000 saplings at 1190 farmers’ field and 25 organizations in 29 states and 5 union territories during 2015-2017.
At present Indrajit has planted HRMN-99, ANNA, and Dorset Gold varieties of apples in his orchard. Anna and Dorsett Golden are two of the world’s most favourite apple varieties.
HRMN-99 is a variety of low chilling apple developed by grassroots innovator Hariman Sharma of Bilaspur in Himachal Pradesh, supported by NIF-India, an autonomous body under the Department of Science and Technology.
“We were told that these apple trees will bear fruit after three years of transplanting but to see it bearing fruit in a year is so exciting. We have been looking after the trees since then,” said Taibanglemba, son of the apple farmer.
The yield from each sapling was around 10- 20 kilos this year weighing about 20- 30 grams per apple. Over the years, Indrajit has been involved in integrated farming and vegetable farming.
Apples are fortified with essential vitamins and minerals and they are an excellent source of fibre. Apples can also boost your immune system, and it can fight against liver, colon, and breast cancer.
Expressing his happiness to see the first fruit, Indrahit added, “it was great to see the first fruit. A lot of people say that planting an apple tree is challenging in Manipur. (Apples and other fruits are imported outside the state. So, if I would be successful in this farming it will also help in boosting the state’s economy.
Indrajit has also mentioned that successful farming is all about “hard work and endurance.” (ANI)

Security around Aamir Khan in Punjab beefed up