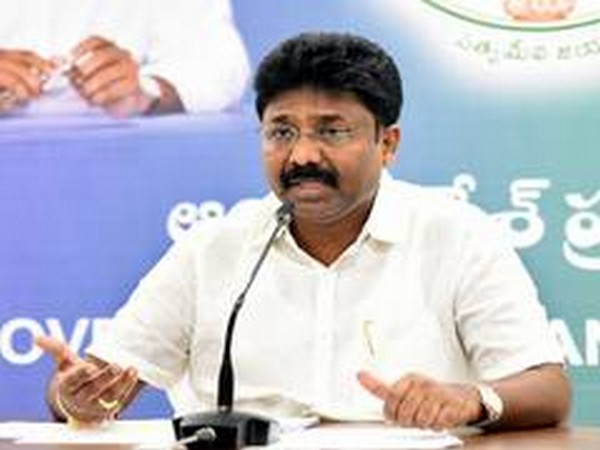 Amaravati (Andhra Pradesh) [India], July 9 (ANI): Hitting out at Telugu Desam Party (TDP) chief N Chandrababu Naidu, Andhra Pradesh Education Minister Adimulapu Suresh on Thursday said that he should apologise to Dalits for obstructing the construction of 125-feet high Ambedkar statue at Swaraj Maidan in Vijayawada.
The Minister accused TDP of intentionally making “ruckus” on the issue of construction of Ambedkar statue.
While addressing media here, Suresh said, “Dalits laud the decision of YS Jagan (Andhra Pradesh Chief Minister) to erect 125-feet high Ambedkar statue. Jagan took the self-esteem of Dalits to sky level. But TDP was crying that his statue should be erected in the outskirts of the town.”
“Chandrababu must clarify whether he is in favour of Ambedkar statue at the centre of Vijayawada city or not,” he said asking that why Naidu could not complete the Ambedkar statue in four years.
“TDP did nothing for upliftment of Dalits. Our government has done many things for the welfare of Dalits. I am ready for debate. It is TDP that obstructed the allotment of house sites to Dalits in Amaravati capital region, by filing cases in courts. Our leader and CM YS Jagan is prominently propagating the ideology of Ambedkar. But Chandrababu Naidu is creating hurdles for erecting Ambedkar statue, he should apologise to Dalits,” he said. (ANI)