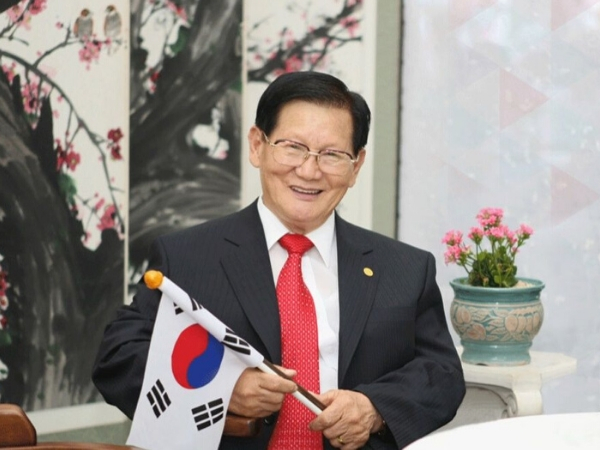 New Delhi [India], July 1 (ANI/Digpu): Chairman Lee Man-hee of Shincheonji Church of Jesus, the Temple of the Tabernacle of the Testimony (Shincheonji), sent a message to thank the Shincheonji members in Daegu who decided to donate their plasma needed in developing COVID-19 vaccine.
Shincheonji stated on the 29th that Chairman Lee sent a one-page letter on June 27 to thank the members. Through the letter titled, “To the beloved members of Daegu Church,” Chairman Lee said, “I was delighted upon hearing the news of your intent to actively participate in donating plasma (blood) for the development of the vaccine for the cure of COVID-19. I believe that you are the ones who received the blood of Jesus.”
He added, “I am very thankful to the government, which took charge of preventing the spread of COVID-19 and providing treatment for it. This is not something our church could resolve,” and, “I know that you [Shincheonji members in Daegu] have gathered your hearts in our collective wish to free all the people of the world from the pains of this disease.”
Chairman also stated through this message, “This is the work that needs to be done as citizens of this country and as true believers. It is keeping the command of Jesus of loving your neighbour as yourself (Mt 22:39), and I am thankful that you have gathered your hearts for this good work and in making this decision that is like the light,” and, “Let us all pray in the name of Jesus to exterminate COVID19.”
According to a statement released by the Korea Centers for Diseases Control and Prevention on the 23rd, Shincheonji Church in Daegu and Green Cross came to an agreement for the members’ plasma donation after discussion. There were 6,901 confirmed cases in Daegu at that point, with Shincheonji members accounting for 61.8 per cent with 4,265 people who were confirmed to have contracted COVID-19. They were tested in the early days of the pandemic, and most of them have fully recovered since then.
While it has been difficult to find plasma donors, Shincheonji members’ mass plasma donation can speed up the COVID-19 vaccine development process.
Shincheonji members had been facing public criticism that they caused mass COVID-19 infection in the beginning when the virus started to spread. Shincheonji explained, “It seems that Chairman wants to thank the government for treating our members, while also thanking Daegu Church for volunteering to repay the government’s effort with plasma donation.”
This story is provided by Digpu. ANI will not be responsible in any way for the content of this article. (ANI/Digpu)

Will continue to do my best: Bajrang Punia