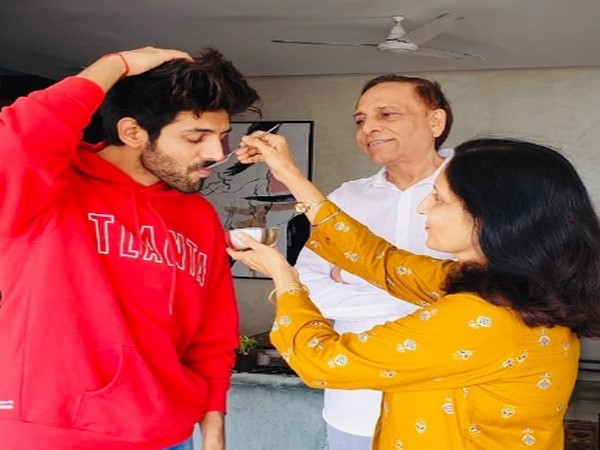 New Delhi [India], June 30 (ANI): Actor Kartik Aryan, who knows how to bring a smile on his fans’ face, on Tuesday, geared up for Prime Minister Narendra Modi’s address to the nation following an age-old practice of eating sugar and yogurt. Indians consider consuming ‘dahi-cheeni’ auspicious before doing something important.
Before Prime Minister Modi’s address to the nation at 4 pm, he uploaded a picture on Instagram where his mother can be seen feeding him sugar and yogurt with a spoon while his father is seen standing beside him. The actor’s caption also hinted that he had a spoon of dahi-cheeni to watch Prime Minister’s speech.
“Gearing up for Modi ji’s Address to the Nation,” the ‘Pati Patni Aur Woh’ actor wrote in the caption.
The picture received an overwhelming response from his fans and several of them flooded the post with comments.
Prime Minister Narendra Modi on Tuesday announced that his government will extend the Pradhan Mantri Garib Kalyan Anna Yojana till the end of November under which foodgrains are being provided to the poor and needy. (ANI)