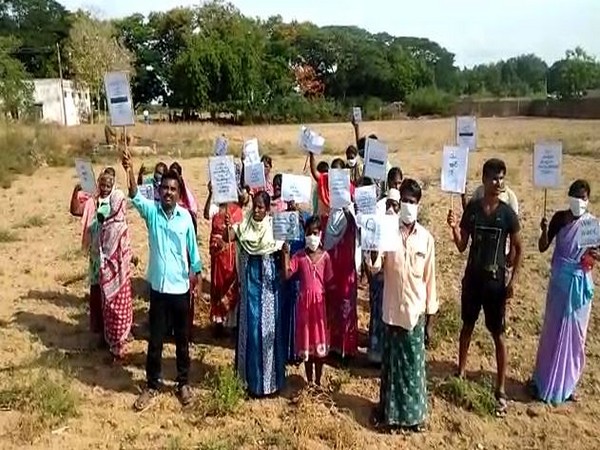 Nellore (Andhra Pradesh) [India], June 24 (ANI): Villagers of Tada in Andhra Pradesh’s Nellore district protested against the government, stating that it is taking back the agricultural land for the sake of house pattas scheme.
Some aggrieved people raised slogans and stated that they will self-immolate themselves if YS Jagan Mohan Reddy-led government does “injustice” to them.
The farmers said that if the government really want to help the poor, it could take unused government land available around Vijayawada. The villagers appealed to the Collector, local MLAs and MRO by filing a petition not to take the land in the acquisition.
One woman said, “Our families have been using these lands for the past 60 years for agricultural purpose. No government asked the land back. Nobody harassed us so badly. Our troubles started after Jagan came to power. We are Dalits, so we are targeted, threatened, even slammed by YSRCP MPs.”
The woman added, “The officials are sent for resolving the issue. But the officials do nothing. They collected Rs 20,000 for every cent. We didn’t have anything except this land. But the police are coming to us daily and threatening us to vacate the land.” (ANI)

My kids think Pharrell is my boyfriend: Gwen Stefani

Your grass needs a mow: Michael Vaughan comments on…