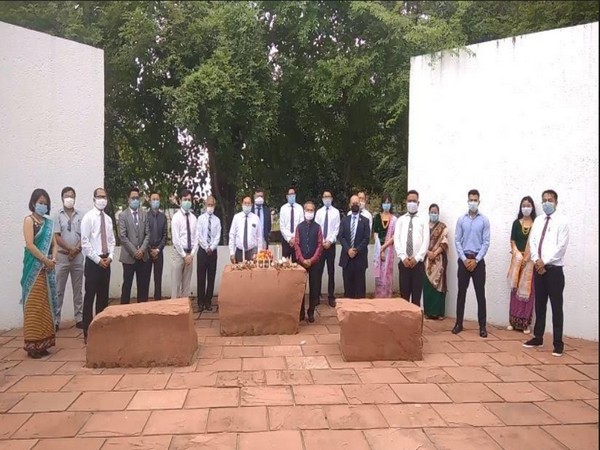 Imphal (Manipur) [India], June 23 (ANI): Dignitaries from Manipur on Monday observed the first anniversary of the Imphal Peace Museum (IPM) in a simple ceremony, remembering the brave soldiers who laid down their lives during the second world war. The event was also attended by a few officials from Japan via webinar.
In the memorial service held at the India Peace Memorial, floral tributes were paid and observed a moment of silence paying tribute to the fallen soldiers. The ceremony was attended by around 20 people due to the restrictions imposed by the COVID-19 crisis.
The IPM’s first anniversary was observed in a simple ceremony at the foothill of Red Hill with the support of the Nippon Foundation (TNF), a non-profit grant-making organization in collaboration with Manipur Tourism Forum and Manipur Government.
Thangjam Dhabali Singh, the former president of Manipur Tourism Forum said that the “Battle of Imphal is very important if you look at our nation-building history. World War two has a big impact on the history that we know today.”
In the ‘Battle of Imphal’ that took place in 1944 was fought between the Japanese and the British Armies. The first battle in the Second World War between the Japanese and the allied forces was fought in Shangshak village in Manipur.
The first anniversary of the IPM was attended by Devesh Deval, IAS Commissioner Tourism, Government of Manipur; Dr Th. Dharali Singh, Founder President, Manipur Tourism Forum; W. Ibohal Singh, Director Tourism Department, Government of Manipur; and Kh. Krishnan Singh, President Manipur Tourism Forum.
Whereas, from Tokyo via online Live, Yohei Sasakawa, Nippon Foundation chairman; Santoshi Suzuki, Ambassador to Japan to India; Shuichi Ohno, President of The Sasakawa Peace Foundation also attended the service.
Yohei Sasakawa, Chairman of Nippon Foundation said: “I remember my recent visit to Imphal where you showed me the museum, It made me very happy to see how you had managed to build such a wonderful museum in such a short time. To foster relations between Japan and Manipur, further enhancement of the museum is particularly important. “
The Imphal Peace Museum was set up in June 2019 in remembrance of Imphal fiercest fighting in the Second World War. Located at Maibam Lotpa Ching, Nambol, the museum is a 6,500 sq ft gallery that houses WWII archaeological finds.
Arambam Angamba, Vice President of WWII Imphal campaign foundation noted: “Imphal is a very important place to Japanese as during 1944 as there was huge casualty for Japanese. Instead of remembering that, now Japanese people are bringing peace.”
IPM is a living memory of the tragic war and it hopes to be a bridge to pass a peaceful world to the next generation. Imphal Peace Museum has won India’s Best Design Award 2019. (ANI)

Russia extends support for permanent seat for India in UNSC

Scolari is most popular coach followed by Van Gaal